Australian Donna Urquhart, the eleventh seed, charged into the quarter-finals of the Grays Women’s Australian Open when she stunned seventh-seeded Egyptian Engy Kheirallah in the second round of the $56,000 WISPA World Tour squash event – the sixth WISPA Gold championship of the year – in Canberra.

“That’s probably the best win of my career,” a delighted Urquhart said. “I reached the same stage of the British Open last year but this one is in front of my parents, who have never seen me play in a tournament of this size before.”

Urquhart said she had gone into the match with a game plan to volley as much as possible and play at high pace against Kheirallah.

“I stuck to it really well, apart from the third game when I had a lapse in concentration,” she said.

Commonwealth Games teammate Kasey Brown made it three Australians in the last eight when Malaysian opponentLow Wee Wern retired injured with Brown ahead 11-4, 12-10. 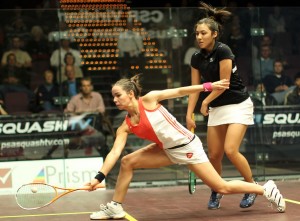 World number two Duncalf suffered a minor hiccup when she lost the third game after cruising through the first two without any trouble.

However, Arnold dug deep and took the game right up to the top seed before Duncalf steadied and regained control.

“It probably took a little bit of time for her to get used to the glass court – I’m lucky that I’d already played on it,” admitted Duncalf. “The first two games I was feeling really good but then I started slacking off and Delia stepped up.

“The last two games were a bit of a struggle and I was happy to get rid of her in four,” explained the 27-year-old from Harrogate in Yorkshire.

Grinham kept her hopes of a second Australian Open title alive when she eased past Bailey, a former world No4.

The 33-year-old Queenslander is playing her first tournament in Australia for four years and said she was still enjoying her squash such a long time on the tour.

“I have to be realistic – I don’t have very big ambitions to get back to number one,” said Grinham. “But I still enjoy playing and the travelling. I just like to come along and try and have a good time.”

Despite the score line, Grinham never looked in any danger against Bailey, with the Englishwoman falling behind in each of the three games and unable to close the gap enough to trouble her opponent.

Third seed Alison Waters and fourth-ranked Madeline Perry both dropped the third games of their matches before winning in four.

“She stepped it up in the third,” Waters said of Stoehr. “She’s so skilful with the racket, you never know where she’s going to put it – she can put in winners at any time.

“I had match ball in the third which she saved, but both the third and fourth games were quite tight.

“I’ve been playing well and made the semi-finals and final in Malaysia and Singapore, which gives you a bit of confidence heading into a tournament, so I’m looking forward to tomorrow.”

Perry is seeded to meet Duncalf in the semi-finals and said she was due for a big win.

“I’m pretty happy to get through because Annie was a tough opponent to get in the round of 16,” said the 11-time Irish champion. “I’ve been playing pretty well all year – I reached the British Open final beating Nicol David along the way.

“But it would be nice to win one of the big ones to be honest.”