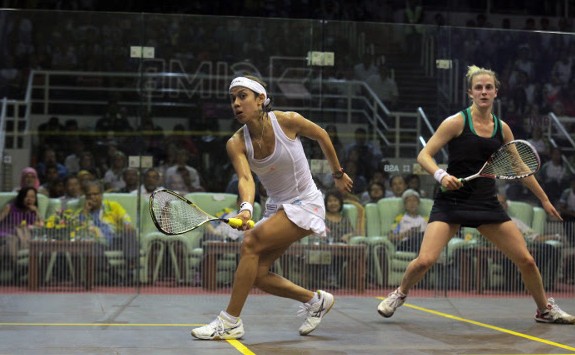 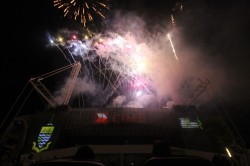 After a sparkling opening ceremony for the Penang CIMB Women’s World Squash Championship which attracted a huge crowd of over 3,000 spectators, Penang’s world number one Nicol David provided the perfect response with a straight games win in her opening match in the premier Women’s Squash Association (WSA) event at the SPICE Arena in Penang, Malaysia

Despite a cold start against Emma Beddoes, the world No22 from England, the seven-time world champion didn’t disappoint – stepping up her game to win 11-9, 11-5, 11-8. 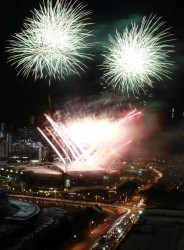 “It’s amazing to have so many people here on the first round of the worlds,” said defending champion David  with her eye on a record eighth title. “It’s really thanks to the crowd that I managed to pull through.”

Meanwhile the day’s action was off to an explosive start with three seeds getting knocked out in the first round.

Au came into the tournament high on confidence following a final appearance at the Cleveland Classic last month, in which she defeated England’s top three players – Laura Massaro, Alison Waters and Jenny Duncalf.

The 23-year-old Heba, who has already won two Tour titles this year, will be Nicol’s next opponent.

“I’m extremely happy … words can’t even describe how I feel right now,” said the Alexandria-based El Torky. “I’ve never got through to the main draw of the worlds in the past and now to be in the top 16 is really unbelievable. It’s definitely my best performance so far.

“The key was really staying came and listening to the advice of my coach. I tend to hit hard and without focus so staying calm really helped me through.”

But while El Torky was in control of her match, Guyana’s Nicolette Fernandes had to resort to her animal instincts to fight back from two games down before beating Grinham, the only other former world champion in the fray who made her debut in the event 20 years ago!

“The key to winning was really me telling myself to be a lion on the court,” said the 30-year-old Fernandes. “I was too passive at the start and I know I needed to get on it more and be an animal, growl more in order to win.

“But I’m really just relieved to win because it’s not easy to come back from two down.” 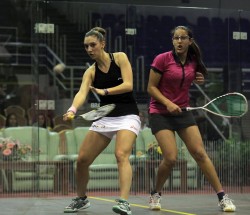 Fernandes will go on to meet France’s world No6 Camille Serme in the second round. Serme earned a hard-fought 11-6, 12-10, 11-7 win over 14-year-old qualifier Habiba Mohamed Ahmed Alymohmed of Egypt.

Earlier, the 3,000 spectators, probably one of the biggest for squash in recent times, were treated to a grand opening ceremony with fireworks, 3D mapping projection and vertical walkway.

The Malaysian crowd will still have more to cheer with world No7 Low Wee Wern due to take the courts against Australia’s Donna Urquhart on Wednesday.