Nour El Tayeb and Nour El Sherbini will contest the final of the WSF Women’s World Junior Championship in Boston, USA, after both completed straight-game wins in the semi-finals at Harvard University’s Murr Center.

Top seed El Tayeb beat England’s surprise semi-finalist Emily Whitlock to reach her third consecutive final in the event, while El Sherbini deposed the USA’s reigning champion Amanda Sobhy in a reverse of last year’s semi-final to set up a repeat of the 2009 final in which she beat El Tayeb to become the sports’ youngest-ever world champion. 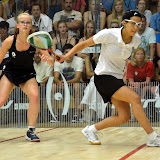 It was an assured performance which put top seed El Tayeb into the final for the third, but last, time. The Cairo teenager, ranked 17 in the senior world rankings, led 5-1 in the opening game and though European Junior champion Whitlock reduced the lead to a single point, the Egyptian took the game – and was totally dominant in the second to open up a 2/0 lead.

The 17-year-old English underdog, who reached the semis for the first time after upsetting 3/4 seed Olivia Blatchford in the previous round, managed to get herself 5-2 ahead in the third – but El Tayeb soon clawed back the upper hand to clinch her 11-8, 11-3, 11-5 victory in 25 minutes. 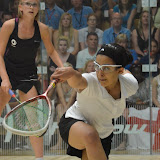 “I’m very happy,” gushed the 2009 and 2010 runner-up afterwards. “I’ve been here for two weeks and I’ve been thinking about the final all the time, but when I get on court I only think about the game I’m playing, about the next rally.

“I might have looked calm on there but inside I’m trying to convince myself that I really am calm, so that I can play my best squash.

“Emily’s so good, she’s come up out of nowhere and made a big impact, I’m so glad I was able to beat her today.” 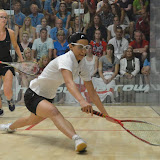 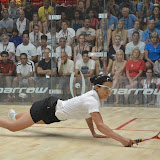 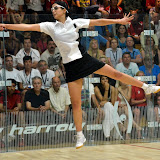 The second semi-final was the first meeting between El Sherbini and Sobhy since last year’s semi-finals when the New Yorker trounced the previous year’s youngest ever champion before going on to become the USA’s first ever winner of a world singles title. 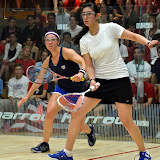 El Sherbini looked calm and focussed from the start – second seed Sobhy perhaps less so – and it showed in the early stages as the Egyptian took a 6-1 lead, aided and abetted by some American errors.

Sobhy settled and reduced the deficit to 7-5, but Sherbini pulled clear again with a series of winners to take the lead.

It was Sobhy who took the advantage in the second, her powerful shots beginning to hit home. The home favourite earned game ball at 10-9 – but 3/4 seed El Sherbini reclaimed the advantage to win the game after a tie-break before taking the third to claim her stunning 11-5, 12-10, 11-9 upset after 30 minutes. 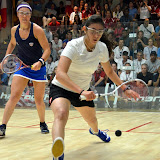 “I can’t believe I’m back in the final, I’m so happy,” said El Sherbini, ranked 32 in the world. “I made a good start and won the first, but when I was down in the second I remembered my training, and all the time I’d spent off court. I told myself that I’d won the first and that I could do it again.

“It was very important to win the second, and the third was close all the way. I thought it should have been a stroke near the end but I told myself to forget it, it didn’t matter, just keep on playing my game and I could win.

“I’m so glad to be back in the final, and to be playing Nour again like we did in India. We’re good friends and play each other a lot, and hopefully we can have a great match.” 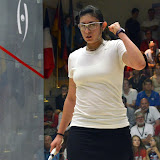 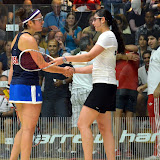 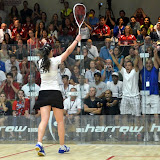