England’s unseeded Tania Bailey caused the biggest upset on the opening day of women’s action in the CSR ViridianAustralian Open when she upset New Zealand title-holder Joelle King to reach the last sixteen of the $56,000 WISPA World Tour squash event – the sixth WISPA Gold championship of the year – in Canberra.

“It was a tough match,” explained Bailey later.  “I started a bit slowly as Joelle came out so fast and I took a while to get used to the pace.  I lost the first but then settled in and won the next two.

“The third was really tight all the way and I managed to scrape it 12-10, but put in a lot of effort to win that game.  I then went down a few points really quickly in the fourth and thought it was best for me to save my energy and go flat out in the fifth!

“I played well in the fifth and managed to stay ahead all the way through the game.  I am really pleased to have come through as I lost to Joelle 3/0 last time we played and she is a really strong player.  I look forward to getting on the glass court tomorrow.”

The 30-year-old from Lincolnshire, recently named captain of England’s Commonwealth Games squad for Delhi in October, will now face Rachael Grinham, the No2 seed from Queensland who is leading home interest in the championship. 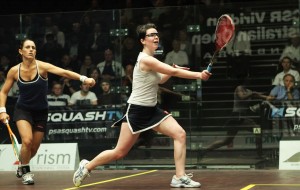 “It didn’t feel that comfortable,” the Amsterdam-based Grinham said later. “I think she gifted me quite a few points, but I always feel a bit shaky because I’ve never seen these young girls play before.

“You get on the court and the points can get away from you. I was really having trouble feeling settled and I was quite lucky she made a few errors.

“In the fourth game I tried to be confident and attack and pick the pace up a bit.”

Duncalf never looked in any danger against Sobhy, who later conceded there was a huge difference between the junior and senior ranks.

“In juniors if you play a good shot you win the point, but that’s not the case against someone like Jenny,” said the 17-year-old from New York.

Brown, who is seeded to meet Duncalf in the quarter-finals, said she was feeling confident after some solid training in the off-season.

“I did a lot of work over the last couple of months and I’m feeling pretty good physically,” she said.

“I’ve got a tough draw, I play Low Wee Wern next then probably Jenny so I will have to be on top of my game.”

Hong Kong’s Annie Au was another former champion to get through when she beat India’s Dipika Pallikal 11-8, 11-5, 11-7, and she was joined in the second round by third-seeded Englishwoman Alison Waters, who beat Austrian qualifierBirgit Coufal 11-3, 11-3, 11-2.

Experienced Malaysian Sharon Wee also pulled off a significant upset to claim a place in the second round. The 32-year-old from Malacca ousted Denmark’s 15th seed Line Hansen 11-8, 11-5, 6-11, 11-3, and will now face England’s No5 seedLaura Massaro for a place in the quarter-finals.