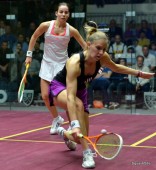 Australia’s Kasey Brown, seeded six, powered to a four game win over third seed Madeline Perry, while fifth seed Laura Massaro prevailed in straight games in an all-English encounter with world number two Jenny Duncalf. For both, appearing in a WISPA World Series Final will be one of their career highlights to date.

The first men’s semi-final was also all-English, and in an often brutal encounter world number one and top seed Nick Matthewextended his run of victories over James Willstrop, winning in four games to reach a third consecutive PSA World Series Final this season.

Matthew’s opponent will be third seed Amr Shabana, after the Egyptian four-time world champion also won in four games, although his match against France’s Thierry Lincou was a much quicker affair, taking  just over half the time of Matthew’s.

Full story from the Official US Open site

Daily updates from the PSA