Chris Simpson, an Englishman who had never before progressed beyond the opening round, today earned a place in the last 16 of the Qatar PSA World Squash Championship after upsetting ninth-seeded Dutchman Laurens Jan Anjema in a dramatic five-game second round battle in Doha. 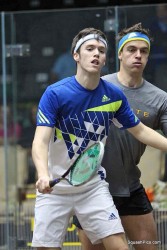 The Guernsey-born 25-year-old made a brilliant start to open a first game lead over Anjema, the 30-year-old world No11 to whom he lost in straight games only two months ago. The Dutchman fought back to draw level, and again levelled after dropping the third game.

In the decider, world No34 Simpson opened up a 5-0 lead – but again Anjema caught up, before taking a slender 7-6 lead.

“Simpson levelled at seven-all and then there was a brilliant rally where Anjema was in total control and seemed to win the point – when Simpson retrieved a brilliant drop shot from the back hand back corner to die in the front, and Anjema had no answer to it,” explained tournament director Alaaeldeen Allouba.

Simpson moved ahead to 9-7 before earning match-ball at 10-9. The match concluded with a brilliant final rally in which the underdog Englishman gave it everything he had before his opponent came up with an unforced error in the front right hand corner where his drop shot hit the tin.

“The first game was the best I’ve ever played.

“The last two tournaments I have come close to beating top 16 players, so I know I can do it!” 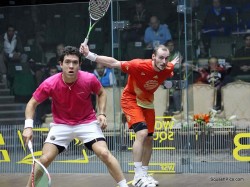 Simpson – one of only two unseeded players in the last 16 round – now progresses to meet French star Gregory Gaultier, the No3 seed who last year finished as runner-up for the third time. It took 50 minutes for world No3 Gaultier to extinguish South American interest in the event, beating Colombian Miguel Angel Rodriguez 11-9, 11-7, 11-9.

A quartet of Egyptians came through the remaining second round clashes today, to join a further two who survived Sunday’s action. 2008 champion Ramy Ashour was in dazzling style as he dismissed England’s Adrian Grant 11-6, 11-2, 11-9 in 30 minutes. 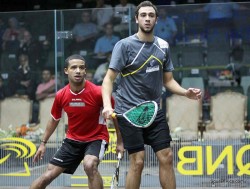 “Ramy started the first game with an awesome display of movement, shot selection and execution,” commented event MC Robert Edwards. “A bewildered Grant found himself chasing shadows as Ramy displayed a set of skills that were from another stratosphere.

“The Egyptian raced to a two-game lead like a man with a train to catch. A frustrated Englishman finally stopped his charge as he got himself into the match and led 7-5 in the third. Again Ramy unleashed some silky nicks and devastating lobs and drives as he mixed up the pace.

“In just 30 minutes it was all over. As quickly as he had entered the arena, he had gone!” concluded Edwards.

There was double disappointment for Lees when English qualifier Joe Lee went down 11-5, 11-2, 11-4 to Egyptian maestroAmr Shabana, a four times winner of the trophy.

“Chris Robertson (England national coach) said to me beforehand it would be like playing two opponents on there today: the court and Shabana,” explained the London-born 23-year-old who upset Pakistan’s Aamir Atlas Khan in the opening round.

“It was a double learning experience playing the best technical player in the world, the way he moves and strikes the ball,” added Lee after his maiden meeting with the former world number one. “There is no better way to learn than witnessing what I did.”

The match earned significant praise from spectator Daryl Selby, the No11 seed from England who was enjoying a rest day after winning his second round match 24 hours earlier. “@amrchabana was absolutely awesome just then,” tweeted the world No10 later. “I thought Joe played well, I would have been happy with 11 points in the whole match!”