As part of Squash’s campaign to become part of the 2020 Olympic Games, the World Squash Federation  today unveils www.squash2020.com – a social media portal enabling the sport’s global fan base to learn more about the bid and show their support for the campaign.

Squash2020.com will feature a wide range of social media tools including Twitter, Facebook and YouTube, enabling squash fans worldwide to keep up to date with the campaign.

The squash2020 bid logo was also unveiled with the slogan Sport At Its Best. 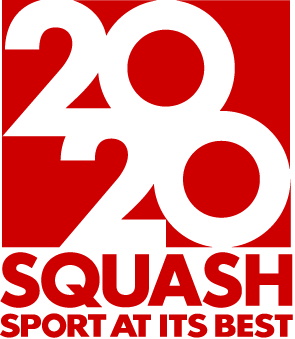 “The Squash 2020 bid effort will be strongly supported by social media” said WSF President N Ramachandran.  “We will be generating content to squash fans all over the world via Twitter, Facebook and YouTube throughout the duration of the bid process until ‘judgement day’.

“There are many thousands of squash fans scattered across various social media platforms and we hope to unite all of them by getting them (and their friends) to Back the Bid at squash2020.com.”

Meanwhile, it was also confirmed that later this month Squash will unveil a bid brochure capturing the sport’s key attributes and outline what the sport can bring to the Olympic Movement – with commentary in French and English.

WSF CEO Andrew Shelley said: “Our bid brochure will seek to capture the features of our growing global sport, the sheer athleticism of the players, the especially valuable ability to place glass show courts in locations that show off host cities, our development credentials, growing broadcast reach and our commitment to push the boundaries of innovation.”