Eighteen-year-old Amanda Sobhy booked her semi final place at the WSA Cleveland Classic 2012 after Jenny Duncalf was forced to retire in injured.

Duncalf started strongly, initially appearing untroubled by the blow to her knee, sustained in a round one clash with the racket of Sarah Kippax.  The world No2 played accurate squash to take the first game, but seemed to slow down significantly in the second.  The Harvard student Sobhy, took full advantage of the deterioration of her opponent and levelled terms before extending a lead comfortably in the third.  During the fourth the Englishwoman was clearly someway short of full fitness, and the blow to her knee yesterday was evidently still an issue.  At 1-5 down, Duncalf called time after pulling up short on a drop, offering her hand to the teenager in concession of the match. 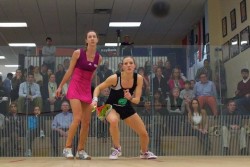 Massaro got the better of things early on, jumping out to a 7-0 lead, but a few errors crept into her play, and Urquhart was able to fight back to 8-10 before surrendering a stroke to hand the English No2 the first game.

Urquhart carried the momentum into the second and blasted past Massaro with some impressive front-court deception.  It looked like the makings of a see-saw battle, but Massaro came out in the third playing more aggressively and got Urquhart on her heels, taking the game 11-6.  The fourth game was all Massaro, as her precise shot-making forced a series of tins out of the Australian.

At the other end of the draw, world No1 Nicol David dispatched Annie Au of Hong Kong in straight games.  Sitting out round one due to her opponent’s injury, the extra rest did Au no favours against the top seed.   David will be even more determined to finish as champion of this event, following her final-day loss to Massaro in last year’s competition. 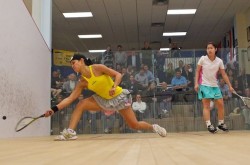 That said, Au played a stronger match than the score would indicate, her deft flicks and drops always put David under pressure. But the Malaysian was able to extend the rallies until she could find a decisive advantage and finish the points off.

David will play experienced Irishwoman Madeline Perry, after the No4 seed beat young Raneem El Weleily in a close four-game battle.  It was a contest of strikingly different temperaments.  Perry seemed cautious at the start, whereas El Weleily was almost nonchalant as volley drops rolled off her racquet.  They gave the crowd further displays of aggressive squash, trading points equally until the business-end of the first game, when a pair of tins and a loose shot from El Weleily gave Perry the advantage to take the game. 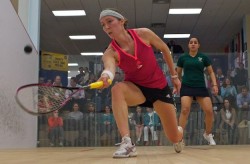 The next two games were nail-biters.  In the second El Weleily jumped to a 9-3 lead but then lost focus; Perry fought back to 9-9, but the Egyptian got her head back in the game and finished the game off 11-9.  The third was a similar story, as El Weleily again extended an early lead, but was unable to see away the result.  At 12-11, she hit a potential game-winning drop into the tin and that was the beginning of the end.  Perry took the game 14-12 and then cruised to an 11-3 win in the fourth.