Amanda Sobhy celebrated the perfect 17th birthday by beating Egyptian rival Nour El Tayeb in the final of the Women’s World Junior Squash Championship to become the first US winner of the prestigious World Squash Federation event in its 16th year at the ACR Sportcenter in Cologne, Germany.

“It’s the best birthday present anyone could ever ask for,” said the New York teenager after recovering from a game down to defeat fellow 17-year-old El Tayeb 3-11, 11-7, 11-6, 11-7 in 37 minutes.  It was Sobhy’s first victory over the Egyptian in four meetings on the junior international circuit since January 2008.

The victory not only ends Egypt’s seven-year stranglehold on the title since 2003, but also consigned Cairo-based El Tayeb to a runner-up finish for the second year in a row.

Third seed Sobhy made her breakthrough in the semi-finals when she beat reigning champion Nour El Sherbini, the 14-year-old favourite who won the title last year to become the sport’s youngest ever world champion.

Sobhy, whose success makes her the first US player to win a world singles title, is no stranger to historic achievements in the sport:  In May, the left-hander became the first 16-year-old to win fourWISPA World Tour titles – an achievement which has taken her to a career-high 36 world ranking.

In the bronze medal play-off match, India’s No2 seed Dipika Pallikal made up for the disappointment of failing to make the final for the second successive year by battling to a 4-11, 11-4, 11-8, 8-11, 11-8 over favourite Nour El Sherbini in 52 minutes. 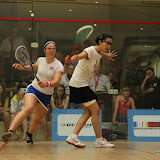 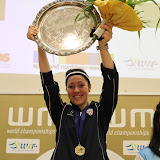 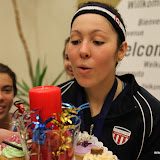 It was the best possible 17th birthday present for Sobhy, the left-hander from the USA who ended the historic world champion reign of Nour El Sherbini by beating the 14-year-old event favourite from Egypt 12-10, 14-12, 11-9. 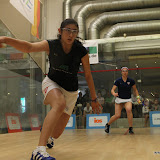 El Sherbini, then only 13, won the title last year against expectations to become the sport’s youngest world champion in history.

But New Yorker Sobhy, ranked above her Alexandria-based opponent, battled to her impressive win in 38 minutes – repeating the straight games victory she achieved over El Sherbini in the world team championship that followed last year’s historic individual triumph.

Sobhy, however, has also made her mark in squash history – by becoming the first 16-year-old to win four WISPA World Tour titles.

But it will be on her 17th birthday that the world No36 bids to become the first US winner of a world junior squash title. 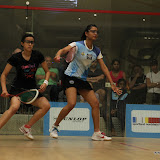 Her opponent Nour El Tayeb is marking her second successive appearance in the final – and achieved her success for the second time in a row by beating Dipika Pallikal, the 18-year-old from India who was last year’s favourite and the second seed this time.

El Tayeb boasts a 3/0 head-to-head lead over her final opponent – but the younger Sobhy currently boasts the higher world ranking:  A sensational climax to the event is no doubt in store.