Amr Shabana has produced his fair share of classic tussles with English rivals over the last decade – but the great Egyptian, for all his achievements, has yet to win on British shores.

The four-time world champion went a step closer on Wednesday night at the ATCO PSA World Series Finals when he shaded a brutal battle with Nick Matthew, the world No1, at The Queen’s Club in London.

Playing the best-of-three format that this event stipulates in the pool rounds, Shabana edged the 30-year-old Matthew 5-11, 11-7, 17-15 in a match lasting just shy of the hour mark. The world champion from Sheffield now needs to win his last match on Thursday night against compatriot Peter Barker if he harbours dreams of progressing to Friday’s semi-finals after missing last year’s event following shoulder surgery. 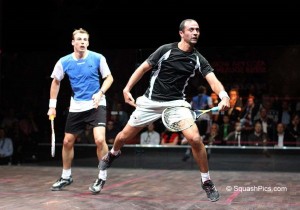 Shabana said afterwards: “Nick has raised the bar for all of us. It is a fine line and I had to perform my best – but at least it means I am right on track to have what it takes to finally win here [in the UK].”

The match was billed as the first to go the distance after straight-games wins on Tuesday and they duly lived up to the hype. Level at seven career wins apiece stretching back to 2001 – Shabana won the majority of his matches during his domineering years five years ago – a methodical Matthew took early bragging rights with a comfortable opener.

Back came Shabana. Having lost out to Matthew on his way to becoming the first Englishman to win the world title in December, the 31-year-old Cairo left-hander took the second after uncharacteristic errors from the Englishman.

It paved the way for an unforgettable decider. At 7-5 down, Shabana advanced to hold two match balls at 10-8. The pair then traded match balls in a gruelling period involving a number of key lets before Shabana’s denouement. 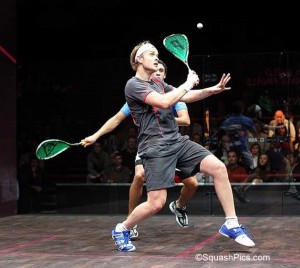 On a night when the victors paid tribute to their opponents, Willstrop said: “Ramy is so unique and he has the great ability to leave you with little oxygen even when he is being deceptive. It is just a higher pace of squash with him but I’m feeling good.”

Willstrop never let Ashour settle after losing a tight first game. He won a succession of tight drops and managed to hold court even when the pair visibly tired in the third. The former world junior champion’s retrieval play was also exceptional as Ashour’s frustration increased during the 49-minute tussle.

In the final match of the evening, Peter Barker beat Wael El Hindi in straight games to give himself a chance of reaching the semi-finals.

The Londoner, who needed to win after losing to Shabana on Tuesday, was handed a conduct warning during the match but kept his nerve to beat his Egyptian opponent 13-11, 11-9. 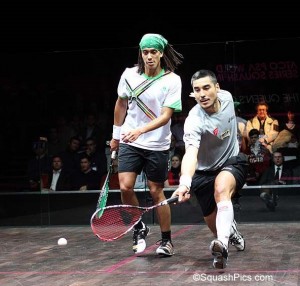 Earlier Alister Walker lost his second match in succession and failed to qualify for the semi-finals. Walker, 28, lost toThierry Lincou, of France, 11-8, 12-10 in another high-tempo match.

Having come out of the stalls early against James Willstrop on the opening night, Walker opted for a more sedate opening against the Frenchman but a number of errors counted against the former Leeds-based player as Lincou took the opener 11-8.

The tempo increased in the second as both players jockeyed for mid-court supremacy. It was level-pegging until Walker found himself with two match balls at 10-8. However the dogged Lincou, who has never lost to Walker, won four points in a row to put himself in the driving seat for a semi-final berth.

The eight players will play in two pools of four until Friday’s semi-finals. The finals will take place on Saturday.