Top seed Nicol David recorded her most decisive win of the set when she overwhelmed Omneya Abdel Kawy, the sixth seed from Egypt, 11-4, 11-7, 11-7 in the final of the women’s $74,000 women’s WISPA Gold event just 25 minutes. 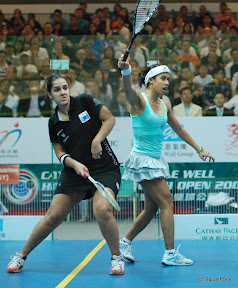 Abdel Kawy, the 24-year-old world No8 from Cairo, celebrated her maiden appearance in a WISPA Gold final after upsetting Australia’s third seed Rachael Grinham in the semi-finals.

But it was one-way traffic for David in the final as the Penang 26-year-old – who arrived in Hong Kong fresh from winning her fourth World Open title in Amsterdam – brushed aside the younger Egyptian’s challenge to claim the 41st WISPA World Tour title of her career, and her seventh of the year.

“I always feel comfortable here, I think it’s because it’s the closest I get to home,” David told www.squashsite.co.uk afterwards. “And I guess Hong Kong is my lucky charm. I’ve been pretty lucky here since 2005, and so far so good!

“Although I haven’t dropped a game this week, this was in no way an easy tournament. All the girls seem to raise their games when they play against me, and believe me, I had to work hard every round. But I just arrived from the Worlds, and I guess I carried the momentum with me. 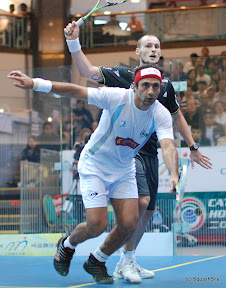 “I thought I played very well today – I wish it could be like that all the time,” concluded the five-time HK champion.

Third seed Amr Shabana made his breakthrough in the men’s $145,000 PSA World Tour Super Series Platinum event when he beat top seed Karim Darwish, the world number one and fellow Egyptian, in the semi-finals.

For the third time in as many years, the 28-year-old from Giza faced French rival Gregory Gaultier in the final. The second seed and world number two had reached the climax in straightforward style, dropping just two games since the first round.

Shabana took the opening game, but – in a repeat of the pattern 12 months ago – Gaultier fought back to draw level.

But it soon became clear that the 26-year-old from Aix-en-Provence was being troubled by a thigh injury picked up some months earlier. Shabana took the third easily before Gaultier conceded the match midway through the fourth, with the score standing at 11-9, 9-11, 11-3, 5-2.

“Winning my fifth title here is an amazing feeling, especially with the quality of the players nowadays on the tour,” exclaimed a delighted Shabana later. “If you don’t play well one day, that’s it, you are out. 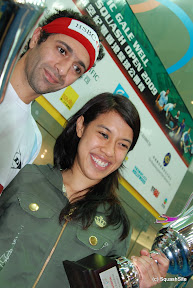 “Of course, you would like to win a match by winning the last point, not because your opponent is injured, but a tournament like this is five matches, and I beat the World Junior Champion, the World number one on the way, and I’ve perform my best all week I feel. So it’s not just about winning the final.

“At one-all, I could see him struggling a bit with his movement, so I gave it a big push at the start of the third. You know, Greg is a remarkable athlete, he’s got a perfect balance between defence and attack, I’m sorry he is injured, but I know him enough, we are very close friends, I’m sure that within a week, he’ll be as strong as anything, and probably will beat us all in the Worlds!