While Malaysia’s world champion and world number one Nicol David recorded her 35th consecutive win and collected her 7th Hong Kong title in a row, for James Willstrop it was a first final and a first title as he became the first Englishman to lift the trophy of one of the squash world’s longest running and most prestigious tournaments in almost a decade. 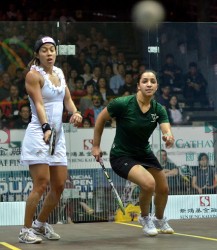 It was a tough ask for 10th seed Raneem El Weleily to put an end to Nicol David’s 34-match unbeaten streak in Hong Kong, and for two games in the first final of the evening at the Hong Kong Cultural Centre it looked as though the pressure had got to her.

David took a 4/1 lead in the first, and although the Egyptian levelled it was only a temporary respite as Nicol raced through to take the lead 11/5.  A 4/1 lead in the second, but this time the mini-comeback only got as far as 6/3 before Nicol doubled her advantage 11/4.

She wasn’t needing to do anything special, was the world champion and six-time defending Hong Kong champion, just her usual steady speedy self, and Raneem was helping her along the way too with a few typically casual errors.

But, in Nicol’s own words, “she just fired in a few winners in a row in the third,” and she did too. A 4/1 lead for Raneem became 4-all, but she continued her improvement and led 9/8 as Nicol’s video appeal after being denied a let after a lungbusting rally was denied. 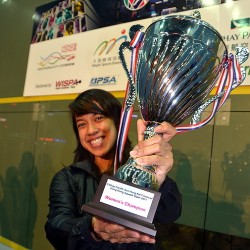 That was as close as Raneem got though, three points in a row for Nicol and that seventh title was hers.

“In the beginning, I was too eager to win, too exited and I just didn’t play my game at all,” admitted El Weleily.”In the third, I thought, nothing to lose, and maybe I started looking a bit better on court!”

Nicol was naturally delighted with a seventh success at a venue which really started it all with her first World Open win in 2005.

“It was pretty hard tonight, especially when she played six nicks in a row in the third, I had to just keep on running and running. Hong Kong has special memories for me so to win here again feels just great. That’s that feeling I’m working for and that I want to keep every time I play.”

James Willstrop became the first English winner of the Hong Kong Open since Peter Nicol in 2002 (and before that it was Phil Kenyon in 1985) when he produced a performance uncannily similar to his defeat of four-time runner-up Gregory Gaultier in thes semi-finals. 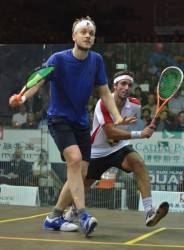 His opponent tonight, Egypt’s second seed Karim Darwish, had unlike Gaultier come through the earlier rounds with something to spare, but it was the Englishman who once again took the first game, then held firm at the end of a particularly tough second.

And, like last night, that was pretty much that as Darwish was unable or unwilling to contemplate coming from two games down as he subsided in the third, picked up some consolation points after going 9/1 down but never looking like completing a comeback. 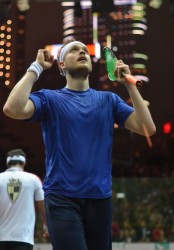 So, revenge for James over that World Team final defeat, and like he said, outside of the World Open if you were able to choose a tournament to win this one would be right up there. Was he pleased … oh yes.

“Like yesterday, I won at the crucial times, and I got on top. One-all is a completely different complexion of the game. Two-nil, it’s a huge mountain to climb.

“This is really a special moment. It takes a lot of time to put it together, to get a week like this one. If I was going to win one World Series, well, the World Open would be nice, but alongside that one, this is pretty special.” 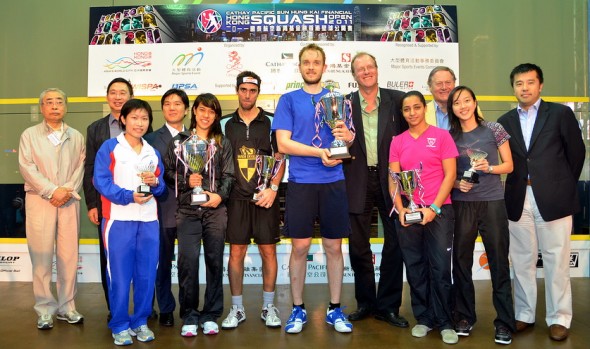