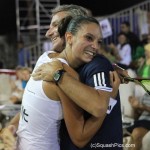 It was a strange feeling at 3-0. Straight away you start thinking about winning and I said to myself ‘don’t think about that’,” Serme explained to the official website www.sohosquareworldopen.com/2010

“She came back and it was close and then I played well again. I was trying to think about playing point by point and trying not to think about the score.” 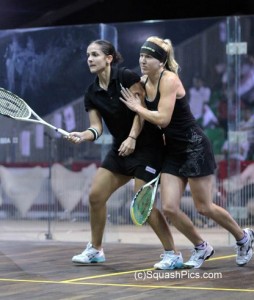 “I had memories of the last World Open when I was up against Rachael (Grinham) and went on to lose 3/2,” said Abdel Kawy, who was spurred on by the home crowd. “Kasey played attacking squash in the third, which she hadn’t in the first two, and I was a bit too relaxed. She’s improved a lot lately and she made it a difficult match.”

The other semi-final will be the one predicted by the draw, in which favourite Nicol David will line up against third seedAlison Waters. 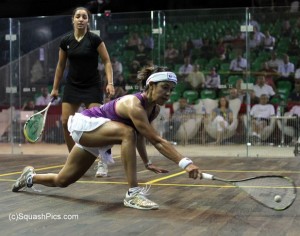 “It feels good, it’s always harder to play a team-mate, especially in the quarters of the World Open,” said David, who is seeded to win a record-equalling fifth world title in Egypt. “You just have to go out and play your best. I was feeling the ball really early, and I feel the best I’ve ever been.”

England number two Waters, now in her second successive semi, said after her win: “I played well enough to get good starts, but then got to thinking too much about the next match, rather than concentrating on what I was supposed to be doing.”

“She was more relaxed when she was down and showed what a great player she is, and I got a bit tense and went for winners too early,” admitted the Londoner

“There’s a few things to work on, but a win’s a win and I’ll take a World Open semi-final!”