James Willstrop and Nick Matthew set up the tantalising possibility of an all-British men’s final at the ATCO PSA World Series Squash Finals after both reached the semis on Friday. 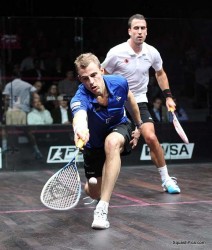 “I want to say thank you to the Olympians for coming. It means a lot to have them supporting squash,” said Matthew, after delivering a 11/2 12/10 win, which proved enough to seen him finish second in his group behind Amr Shabana of Egypt.

“It was getting a bit edgy towards the end of the second. I got a bit tentative but that’s what happens when it’s all on the line,” said Matthew, who faces a tough semi-final against feisty Frenchman Gregory Gaultier on Saturday.

Willstrop will take on Shabana on Saturday after sealing his spot in the last four with a vital 11/4 11/8 29-minute win over Germany’s Simon Rosner in what was a must-win final group match for him. “It was a very physical match. Simon’s improved massively. He’s very strong and an incredible athlete. I had to be really on it tonight to win it,” said Willstrop. 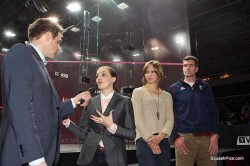 In the women’s event, Laura Massaro and countrywoman Jenny Duncalf will play an all-English semi-final on Saturday. Duncalf earned her semi spot with a hard-fought 18/16 4/11 11/9 win over 17-year-old Egyptian Nour El Sherbini. “Here’s hoping I’ll be fresh for tomorrow,” said Duncalf afterwards. “These youngsters don’t seem to feel it too much! I was just relieved to get that first set in the bag. That’s always the key with this best-of-three format.”

Massaro’s wins in her first two group matches (including victory over World No.1 Nicol David on Thursday) were enough to see her through, despite an 11/5 7/11 11/6 defeat in her final group match to Hong Kong’s Annie Au.

All the men’s and women’s semi-finals and final will be screened in the UK on Sky Sports 3, starting at 18:00 GMT on Saturday. Both Finals will also be broadcast live.