Straight games victories by Daryl Selby and James Willstrop in the quarter-finals of the JP Morgan Tournament of Champions have ensured English representation in Thursday’s final of the first PSA World Series squash event of the year at Grand Central Terminal in New York.

“Extremely happy to reach my 1st ever major semi final,” tweeted Selby after his emphatic 11-8, 11-8, 11-8 victory over qualifier Marwan El Shorbagy, the reigning world junior champion from Egypt to whom he lost an ill-tempered World Open clash last November.

The 18-year-old from Cairo finally ran out of gas against his more experienced opponent – whose strategy was to capitalise on the fact that El Shorbagy was playing his fourth match of the tournament and had been pushed to the limit in his five-game battle with Englishman Tom Richards the night before.

“In the first game and a half especially, I tried to make the rallies long and hard,” said the delighted Selby following the win which takes him into his first World Series semi-final after 39 appearances in the elite PSA events since May 2006.

“This has been a really great week,” added the 29-year-old world number 11 from Essex, referring to his opening round defeat of fourth seed Karim Darwish. “I have managed to make that win against a top ranked player really mean something by getting to the semis.” 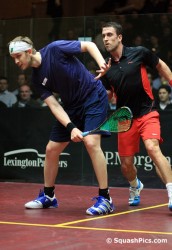 Selby, the only unseeded player to make the last eight, will now face England team-mate James Willstrop, the 28-year-old from Leeds who is competing in his first ranking tournament as the world No1.

Massively understating the extraordinary quality of his play, Willstrop admitted later: “I was pretty close to being in the zone.”

The Yorkshireman started especially strong, jumping out to a 6-1 lead in the first game and a 6-2 lead in the second, winning the games with seeming ease. Willstrop’s pinpoint accuracy never wavered, whether he was hitting the ball tight, or volleying a deft drop shot. 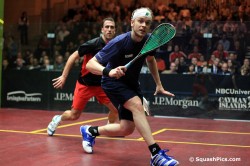 Londoner Barker had a momentary surge in the third game when he built up a 5-3 lead, but it was short lived. After going ahead 7-5, Willstrop allowed Barker only two more points before winning the match 11-4, 11-3, 11-6.

“He controlled every aspect of the match,” said Barker, the world No7. “James showed tonight why he is the number one player in the world. He has set the bar very high for the rest of us.”

The world No1 moniker is new for Willstrop, having achieved the status at the beginning of the month: “It can be a double edged sword,” said the Englishman. “Of course, as an athlete, this is what you strive for, but once it is achieved, the expectations can be quite high. It gives you a bit of lift, but you still have to continue to do all the things that got you to number one. Ultimately, it doesn’t mean anything unless you win tomorrow.” 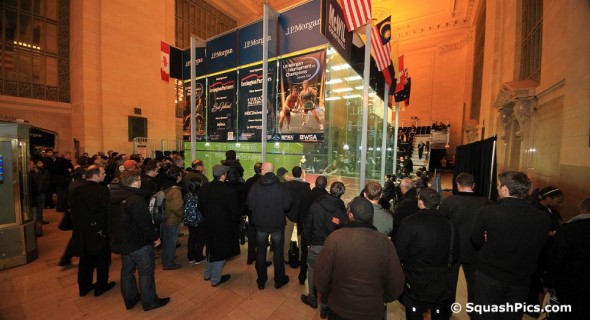