One week after beating former world champion Nick Matthew in Kuwait, England’s Daryl Selby set up another possible giant-killing clash with No2 seed James Willstrop in the Canary Wharf Classic in London.

Selby had to dig deep to recover from a 2/1 deficit to beat Germany’s Simon Rosner in an 86-minute first round battle in this PSA World Tour International 50 squash event before a sell-out crowd at the East Wintergarden. 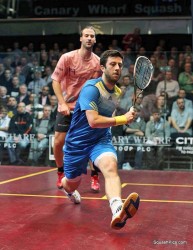 World No15 Selby produced some phenomenal retrieving, and delivered plenty of outstanding winners, to wear down an opponent just one place below him in the world rankings.

Selby raced through the first game from 3-2 down and seemed certain to take it as he built a 9-3 lead. However, Rosner produced a similar response to draw level at 9-9 before Selby closed out the game.

Rosner had suffered from numerous unforced errors in the first game but tightened up to win the second 11-4 and the third 11-7.

The fourth game was a huge battle as Selby showed his determination to stay on court in his favourite tournament.

He continually dug out Rosner’s best shots to frustrate the tall German and a huge roar of relief echoed round the court as he won the game 11-8.

Rosner made too many errors in the fifth as Selby advanced from 3-3 to 8-3. Despite a late rally from Rosner, Selby closed out the match to set up another huge battle with No2 seed Willstrop later in the week.

Selby said: “It’s no secret that this is my favourite tournament, with so many supporters in the crowd, and it’s unusual to have such a closely-matched draw in the first round.

“Simon has been playing well recently and it was always going to be a battle.

“To win here is always a good feeling and I’ve got a day to think about facing James in the next round. I have a big fat zero against my name in our head-to-head series and it would be nice to get one win on the list at some stage in my career.

“It was good to get the win over Nick in Kuwait. As professionals that’s what we train for.” 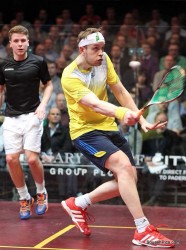 Willstrop, a three-time Canary Wharf champion, dropped a game to wild card Charles Sharpes before asserting his authority to clinch a hard-fought victory.

The 29-year-old from Leeds, fighting the effects of jetlag after finishing runner-up to world No1 Ramy Ashour in Kuwait, was impressed by his young opponent’s endeavours.

“There are no easy matches at any level, and that is exactly how it should be,” said Willstrop. “I think Charles acquitted himself very well this evening.

“Make no mistake, this is foreign territory for young players who are not used to playing on the glass court before a full-house audience like this. It’s a huge thing to deal with.”

Regarding the internet phenomenon that followed his recent trick shot in the Davenport North American Open, he added: “The response has been truly amazing.

“It took me completely by surprise at the beginning and more newspapers, TV stations and websites seem to be picking it up every day.

“I am pleased that it has helped to raise the profile of squash in a very important year for the sport as we seek to win a place in the Olympic Games.”

Willstrop certainly entertained the crowd with several fakes and holds against Sharpes, including one particular gem to win the third game, but he said: “The trouble is, I’m so conscious of doing it that I’m trying to do it too often. I’ve got to get out of the habit of not being sensible.” 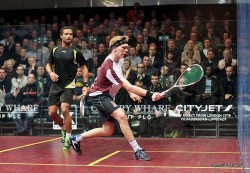 Two left-handers from London made first-round exits. Finnish qualifier Henrik Mustonen sprang a major surprise by beating world No17 Adrian Grant to set up a quarter-final clash with Egyptian No3 seed Mohamed El Shorbagy, who overcame another qualifier, Adrian Waller.

Mustonen, the 22-year-old world No53, said: “That was one of the best results of my career. It is always difficult for players who win through to play on the glass court because there are lots of issues that can take you by surprise. Just simple things, like seeing the ball, for example.

“Also, there can be mental issues. You feel happy because you have won two important matches to get through to the main draw, but you have to raise your game again to face a player who is much higher in the rankings.” 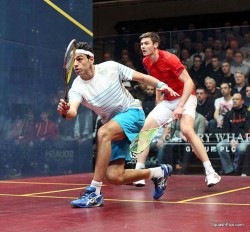 Shorbagy was full of praise for world No36 Waller. “England and Egypt are the biggest nations in squash and any match between those two countries is a battle,” said the world No5 from Alexandria.

“Adrian played very well and I hope he gets the support he deserves because players like him are the future of English squash.

“It’s a great feeling to play in front of a full-house crowd on day one. It doesn’t happen in many tournaments but all the players love playing before such a wonderful crowd in such a great venue, and that’s why they love coming back year after year.” 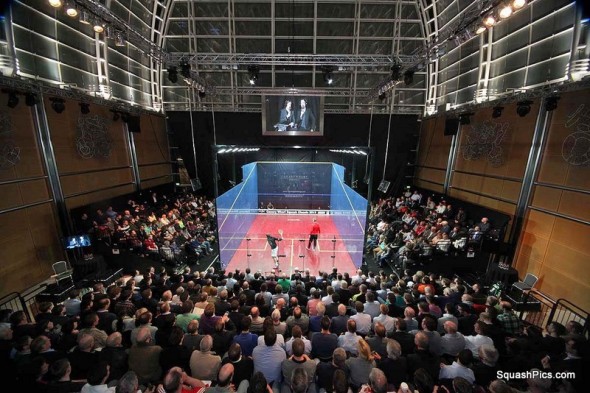