In an opening day of the JP Morgan Tournament of Champions which was littered with upsets, England’s Daryl Selbyclaimed the biggest scalp with a career-first win over Egypt’s Karim Darwish, the No4 seed, in the first PSA World Seriessquash event of the year in New York.

After losing the first game 4-11 on the all-glass court at Grand Central Terminal, Selby went ahead 9-3 in the second. The former world No1 from Cairo was not going to be dismissed so quickly and worked his way back into the game to take a 10-9 lead. 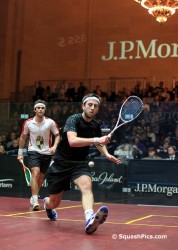 “That was really the turning point in the match,” said Selby later. “Because if I had lost that second game, I am not sure I would have been able to come back from being down 0/2.”

Once Selby secured the second game 13-11, the momentum and confidence shifted from the Egyptian, ranked five in the world, to the Englishman. Selby picked up speed and intensity, winning the third game 11-8 and the fourth 11-5.

“I just wanted to play well and see where it took me,” said Selby, the world No11 who was making amends for a shock first round defeat in last week’s Comfort Inn Open in Vancouver, where he was the fourth seed

The 29-year-old from Essex next faces Germany’s Simon Rosner who defeated highly-rated Egyptian Tarek Momen 11-9, 9-11, 11-8, 11-7. “Being in the second round of the main draw is phenomenal,” said the 24-year-old German number one from Paderborn. “I felt comfortable out on court today even though my short game wasn’t at its best. But under pressure, I felt like I played better shots.”

Marwan El Shorbagy, the 18-year-old reigning world junior champion, engineered the day’s biggest upset when he ousted former world No1 and eighth seed Thierry Lincou in four games. The Egyptian qualifier was beaming from ear-to-ear as he savoured his stunning victory.

“For me, Lincou is one of the greatest in the game,” said the Alexandra teenager. “So this is amazing for me.”

Coming into today’s match, El Shorbagy was mindful of a 3/0, 27-minute loss to the Frenchman in September. “I figured I needed a new game plan,” he said. When asked what the game plan was, his older brother Mohamed, the event’s No7 seed, piped up: “Hit and run!” 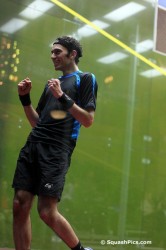 In fact, El Shorbagy junior covered a lot of court as he went toe-to-toe with one of the sport’s strongest and most balanced players. The 35-year-old Frenchman, who started playing the PSA tour the year his opponent was born, fended off his upstart challenger in the first game, 11-9, by hitting strong drives to the rear of the court and then mixing in a variety of shots. But his young challenger was undaunted, and took advantage of an increasing string of errors from Lincou to win the next three games, 11-5, 11-7, 11-7.

“I made a lot of errors,” said Lincou after the match, who attributed his lack of match toughness to a two-month hiatus at year end. “You really have to prepare yourself to win, because the youngsters want to prove everything and nowadays even the first round is a tough one.”

El Shorbagy, while delighted with his opening round victory, was quick to point out that “the tournament is not over for me; I have a few more rounds to win.”

He will next face a rested Tom Richards, who defeated qualifier Max Lee of Hong Kong 11-6, 11-5, 11-4, in just over half an hour. “I set my stall out early,” said the Englishman. “I wanted to show Max that that I was going to make it tough for him.”

Lee acknowledged the success of Richards’ intent. “He put me under so much pressure.” The earnest 24-year-old, despite losing, was nonetheless thrilled with his first visit to NYC. “It was such a great feeling for me when I got on the glass court here and looked up at the packed crowd.” 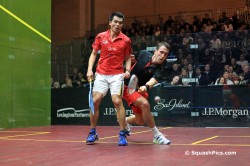 The toughest battle of the day was enjoyed by Peter Barker and Ong Beng Hee who pushed each other to the limit in an 84-minute outing that saw sixth seed Barker move onto the second round. The 31-year-old Malaysian qualifier started quite strongly, winning the first two games 11-8, 12-10.

“My old self might have lost that match,” said Englishman Barker. “But I have been working on staying calm and not panicking.” The work has paid off; Barker dug in and used power and length to wear down his opponent.

“Just think, it can only get better from here,” said Barker’s father as he both congratulated and gave his son a bit of a ribbing at the conclusion of the match. 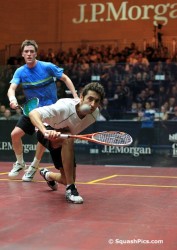 Barker takes on Canada’s Shahier Razik in the next round of play. Razik eliminated Julian Illingworth, the local favourite, in four games. While the New York crowd may have been disappointed at losing the highest ever PSA-ranking US player from the draw, the documentary film crew that is following Razik was delighted that he will continue to play.

“I had a little bit of doubt at the beginning of the match,” Razik said, “because I had rolled my ankle in the last tournament I played and I wasn’t sure how it would hold up. But midway through the match I felt my confidence build.” 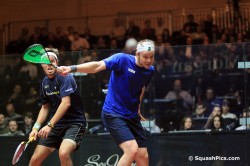 Second seed James Willstrop also looked quite comfortable on court as he dismissed Australian qualifier Zac Alexander11-7, 11-3, 11-4. The 2010 titleholder from England, who has become an author with the upcoming publication of Shot and a Ghost, a selected compilation of Willstrop’s daily reflections during the past year, said that his entry for this day’s diary would read something like: “Great coffee inside Grand Central and played well.”

That might be a slight understatement from the current world No1 who acknowledged that he is playing the best squash of his career and competing as well as he ever has. 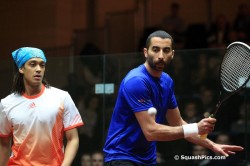 Willstrop’s next opponent also feels that he is playing some of his best squash: Qualifier Mohammed Abbas, who has been ranked as high as 13 in the world, eliminated Alister Walker in four games to set up his second round encounter with Willstrop.

The 31-year-old Egyptian said he is enjoying a second wind in this later stage of his squash playing career. “My recent practices have involved doing a lot of solo hitting, and today I was feeling the ball really well. Plus I was enjoying myself and I really wanted to win.” 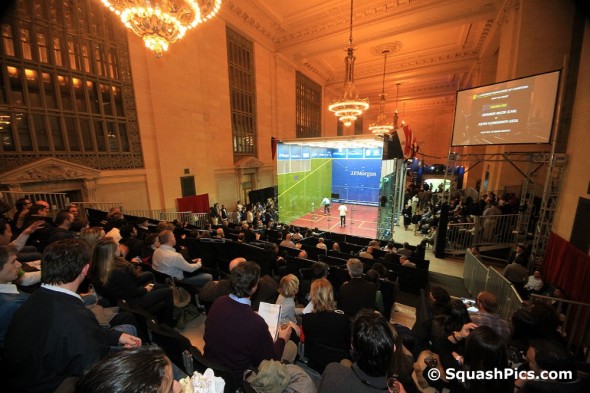