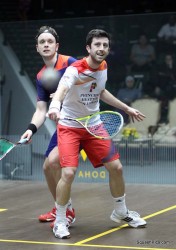 It was a case of 13th time lucky for Daryl Selby today in the Qatari capital Doha where the world No 11 toppled England team-mate James Willstrop in the second round of the Qatar Classic to claim his first ever win over the world No 3.

The upset, which takes Selby into the quarter-finals of the seventh PSA World Series squash event of the year at theKhalifa International Tennis & Squash Complex, follows 12 successive Tour defeats by former world No 1 Willstrop since January 2007 – and further losses harking back to the final of the British Junior U-12 Championship in October 1994 when Selby mustered just two points! 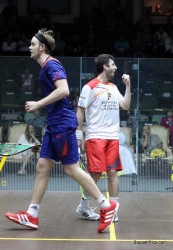 “I’ve come close before and thought I’ve done it, so it’s a massive weight off my shoulders.

“It’s a big confidence-boost, especially coming off making the quarters of the worlds last week. I want to keep going with the momentum and see where it takes me. Tomorrow will be another tough day but I’ll re-group and go forward.

“There are so few opportunities at this event, the guys behind the top eight are like a pack of wolves itching to get into those spots and take the opportunities when they appear.”

Selby clinched match-ball with an incredible winner hit from behind his back!

“I’ve had big win but not been able to follow them up before. I’ve only made one semi-final in one of these big tournaments before but hopefully I can keep progressing and see where tomorrow takes me.” 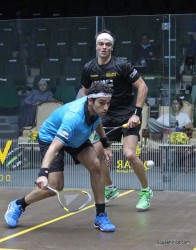 Unseeded Selby will now face fifth seed Mohamed Elshorbagy for a place in the semi-finals after the world No 6 from Egypt beat Dutchman Laurens Jan Anjema, ranked 12 places lower, 11-7, 11-6, 11-8.

“I like playing on this court but I can’t get over confident and I have to make sure that I focus on what I have to do on court,” said the 22-year-old from Alexandria, who was a surprise finalist in last year’s PSA World Championship at the same venue.

“Hopefully I can keep that momentum going now. I knew my body wasn’t going to be 100 per cent ready in the first round but I was fully there mentally. I was expecting myself to be a little off key and the longer the game went on the more accurate and I got and I was pleased that I managed to push myself mentally that way and I’m proud of pushing myself through that and I certainly feel up for it now.” 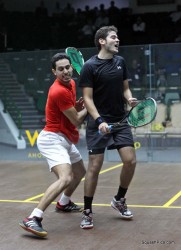 There was another significant upset earlier in the day when unseeded Egyptian Karim Abdel Gawad pulled off a shock 11-9, 5-11, 11-9, 9-11, 12-10 victory over eighth-seeded compatriot Tarek Momen.

“I’m very pleased with my performance,” said the world No 22  after his 82-minute win, his first over former world No 10 Momen. “I was expecting a very tough match – we have played many times in practice over the years and he is a top 10 player in the world so to win is very pleasing.

“This is I think my first win over a top 10 player and I hope to be in the top 10 myself soon so to beat a player like Tarek is a great achievement for me,” added the 22-year-old from Cairo. 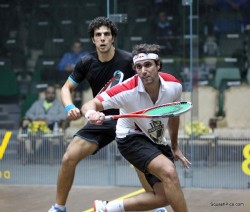 There will also be Egyptian interest in the other half of the draw where sixth seed Amr Shabana takes on England’s No 3 seed Nick Matthew in a mouth-watering quarter-final between two former world number ones. 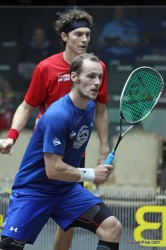 The world No 2 from France will now do battle with top-ranked Spaniard Borja Golan, the seventh seed who beat England’sTom Richards 11-6, 11-7, 12-10.