After four domestic successes in Monday’s top half of the ROWE British Grand Prix draw, Daryl Selby carried a sole English flag through to the second round from Tuesday’s action in the PSA World Series squash event in its second year at the National Squash Centre in Manchester.

“I really scraped through this – there’s plenty to work on,” admitted the 28-year-old from Essex after his first appearance in Manchester since his surprise British National Championship success on the all-glass court in February.

“I dominated one game and he dominated one game – and the others could have gone either way. There were a few crucial points at the end of the fourth game,” explained Selby, who made his world team championship debut for England last month.

“It took me a while to adjust – it’s been my first PSA event for six months. I just wanted to win today – and I’ve done that, so I’m happy.”

But Selby had much praise for his opponent, the 22-year-old world No32 from Zurich. “He’s a really good young player – he’s not only talented but plays it the right way. He’ll be top ten at some point in the future, without doubt.”

But while England dominated action on the opening day, it was Egyptian players that ruled the roost overall today. 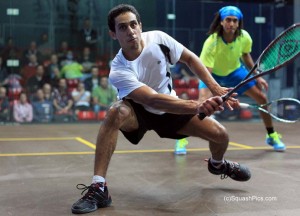 Cairo-based qualifier Tarek Momen produced the day’s only upset when he ousted world No21 Alister Walker 11-8, 10-12, 11-6, 11-6. Walker, a former England international who used to train at the centre, was making his first appearance in Manchester since switching allegiance to his country of birth, Botswana.

“It was really important for me to win today – I haven’t had a good result for five months now,” said 23-year-old Momen, a recent Electronic Engineering graduate from the American University in Cairo.

“Since getting my degree, I have found myself torn between playing squash and following another career,” continued the world No33. “I tell myself I should do the thing I love the best – and that’s squash.

“I’d really like to keep playing and get into the top ten – perhaps even become world number one.”

Despite being ranked higher than Kemp, world No14 Mosaad was enjoying his first win over the left-hander from Halifax after three defeats since 2005.

“I had the advantage today – all the previous times he was ranked higher than me,” explained the tall 23-year-old. “Most of the people I practise with are right-handed, so I find it more difficult playing left-handers.

“This was an important win for me – it will be good for my ranking. I hope to be in the top 10 this year,” concluded Mosaad. 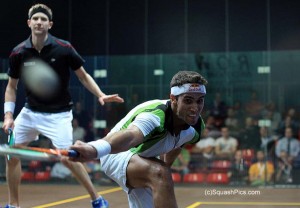 “It was a tough first round – and I had to concentrate hard to beat him,” said the former world No1 from Cairo. “He had a very good start – the first game against Boswell is always crucial.

“He lost a bit of energy in the second game, then I lost my focus at 10-7 in the fourth when I rushed myself.”

Boswell, based in Manchester with his former England international wife Vicky Botwright, rued the fact that he had been unable to capitalise on his first game lead.

“I practise here a lot, so it’s disappointing to go out in the first round,” admitted the Canberra-born 33-year-old.

Did the world No2 feel under pressure as the defending champion? “You always have pressure, you’re always expecting something of yourself. Nick (Matthew) has pressure being the world number one, especially here in England,” explained the 23-year-old.

“It’s been a great year for me. It’s my second year here in Manchester and I’m happy to be back.” 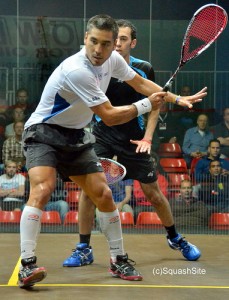 “I had to put the pace high right from the start,” said seasoned campaigner Lincou, aged 35, after his victory over 18-year-old El Shorbagy. “And sometimes it’s really hard to get motivated for first round matches. But as soon as I start expressing myself on the court, the motivation comes back.

“I’ve seen Marwan play, so I knew something about him,” continued the former world champion from Marseille. “He’s so young, yet so mature for his age.”

Gaultier was in high spirits after his first round win: “I have been playing well since the worlds in Germany. I wasn’t feeling great after my first two tournaments, but I worked on my rackets skills and it all came together last month,” explained the 28-year-old from Aix-en-Provence.

“I feel strong mentally and physically and I am really enjoying every day. I just want to compete and do my best every time I go on court. I am looking forward to winning a big tournament.” 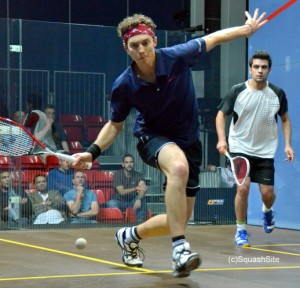 “It’s strange not having David (Palmer) here and it’s a pity about Bozza,” said the world No16 from New South Wales.

“I’m representing everybody in Australia for squash. It’s a pressure – but I like it!

“Aamir beat me the last time we played – and I was so keen to play him again. I wanted to play a bit steadier – and bring a bit more structure to my game.

“In Malaysia, he had a lot of Pakistani support, and that helped him. But I knew he was on his own here,” added Pilley.