Daryl Selby celebrated ‘the best win of my career’ when he recorded his first ever victory over England team-mate Nick Matthew, the world No2, in the second round of the $172,500 HH Sheikh Saad Abdullah Al-Sabah Trophy, The Patriarch Amir, Kuwait Open – the eighth PSA Super Series squash event of the year at Green Island in Kuwait. 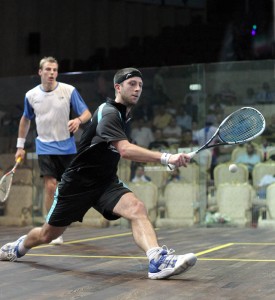 “Definitely the best win of my career,” exclaimed the ninth seed to www.squashsite.co.uk afterwards. “Nick was number one for most of the season, and with Ramy (Ashour), they are the best players in the world.

“Nick is a very good friend, and we respect each other. I give him the respect he deserves, and he gives me the respect I deserve,” added the 27-year-old from Essex about the in-form Yorkshireman who won two gold medals at theCommonwealth Games earlier in the month.

“What am I going to do now? Change my flight, first of all, and try to get a good night sleep – if my room-mate Peter Barker doesn’t snore too much! He’s been pretty good so far!”

A shell-shocked Matthew found it difficult to explain what had happened: “I was leading 2/0, and in the third he made two errors in a row – and in my head I thought ‘that’s it, I’ve won’. And he just gave it a last push, gave it all he had.

“And it worked. Which is a good lesson of what you should never do. I had it. And I let it go.

“I’m not physically tired, it’s just I don’t have mentally anything to give. The game became scrappy, but normally, I can get through those scrappy stages – but today, I just couldn’t.

“I’m not overly disappointed because, this year, I think it’s my third loss – so I’m not doing too badly! And I really couldn’t expect much. Yesterday was my first day of preparation since the Commonwealth Games. It was my biggest goal ever, and after that, I really didn’t want to even look at a squash court!

“But if Delhi made it impossible for me to go for the world ranking, the world title is still possible. So there is always a silver lining, and I guess that I’ll be able to rest a bit more this week.

“Maybe today, he wanted it more than me,” concluded the 30-year-old from Sheffield.

Selby, now in his second Super Series quarter-final of the year, will next face Gregory Gaultier, the fifth-seeded Frenchman who beat England’s Adrian Grant 11-3, 11-4, 11-6. 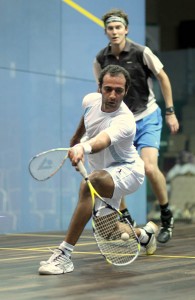 Meanwhile, Egyptians Amr Shabana and Ramy Ashour remain on course to meet in the Kuwait final for the fourth year in a row. Shabana, the third seed who won his fourth World Open title on the all-glass court at Green Island last year, battled for 56 minutes to overcome Australia’s 16th seed Cameron Pilley 7-11, 11-5, 11-5, 11-6.