If there was only one upset on a marathon day three, day four at the Hong Kong Squash Centre saw a more civilised finishing time but four upset results in the bottom half of the draws.

There was just one men’s upset as South African Steve Coppinger took advantage of his reprieve from qualifying to oust Egyptian Omar Mosaad, but the women’s draw was decimated as second and fourth seeds Laura Massaro and Annie Au – much to the disappointment of the home crowd who had earlier seen Max Lee depart – were beaten by Omneya Abdel Kawy and Joshna Chinappa respectively.

Line Hansen weighed in with a fine win over Donna Urquhart to leave the last sixteen draw looking decidedly unbalanced, and Nick Matthew rounded off the day by thwarting Simon Rosner, the German going home feeling unlucky to lose three-nil.

WSA World Series $77k,  Round One, Bottom Half: 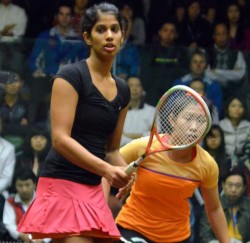 The biggest surprise for local supporters came as home favourite and No.4 seed Annie Au lost out in a five-game scrap with Indian qualifier Joshana Chinappa.  The Hong Kong international dropped the first game, before an ensuing game of cat and mouse led to the 23-year-old adding to the World Series misery she suffered when losing in round one of the U.S Open earlier in the year.

An unexpected inclusion to the second round, Chinappa will face seasoned WSA stalwart Rachael Grinham, who progressed with a comfortable straight-games win over Latasha Khan of the USA. 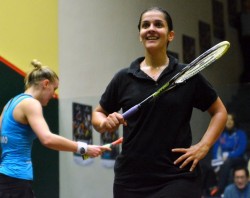 Another shock result saw number two seed Laura Massaro succumb to a heavy defeat against former world No.4 Omneya Abdel Kawy.  The Englishwoman had been set to capitalise on the absence of Raneem El Weleily from the World Series event, but her Egyptian compatriot Kawy dismissed Massaro’s challenge in three games, to allow El Weleily some breathing space ranked as No.2 in the world.

A third upset of the day came as Donna Urquhart suffered her fifth consecutive first round exit, this time at the hand of unseeded Dane, Line Hansen.  In remarkably the pair’s third meeting in round one of this event, Hansen took a comfortable two game lead against the Australian, who seemed unable to mount any serious challenge for points.  The No.15 seed came close to constructing a comeback in the third game, but was unable to swing the tiebreak in her favour.

Hansen will face sixth seed Alison Waters in round two, after the world No.4 dismissed the challenge of her compatriot Emma Beddoes in straight games.

Unseeded Aisling Blake came close to an upset in her first round tie against eleventh seed Camille Serme.  The Irishwoman came from behind twice to draw level and force a fifth game, but the Paris-born player proved too strong in the decider.  Serme lines up against last month’s China Open champion Low Wee Wern, following the seventh seed’s strong three-game victory over qualifierMelody Francis. 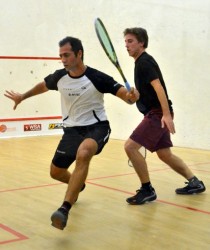 Five-time champion Amr Shabana began his quest for a sixth Cathay Pacific Sun Hung Kai Financial Hong Kong Squash Open today at the Hong Kong Squash Centre by beating French qualifier Mathieu Castagnet in straight games to provide the perfect celebration of his 40th match in the event since his debut in 1996.

The former world number one from Egypt created a record as soon as he stepped onto the court for his first round match in the sixth PSA World Series event of the year – by making his 16th successive appearance in the popular and long-established Tour event.

The seventh seed – winner of the title five years in a row from 2005 – despatched Castagnet 11-9, 11-7, 11-7 in 35 minutes and will now line up against England’s Tom Richards in a bid to reach the quarter-finals for the ninth year in a row.

“Yes, I’ve been coming here for 16 years,” the 33-year-old from Cairo admitted to www.squashsite.com “That was the easiest record to establish ever!” 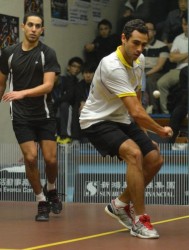 Unseeded Richards defeated experienced Finn Olli Tuominen 11-7, 11-7, 7-11, 11-2 – and will be meeting Shabana for the first time, eager to make his first ever appearance in the event’s last eight!

Making his first appearance in the championship since injury prevented him from defending his 2010 title, 25-year-old fifth seed Ashour ousted fellow countryman Tarek Momen 11-7, 11-8, 11-2 in just 29 minutes, the quickest match of the day. 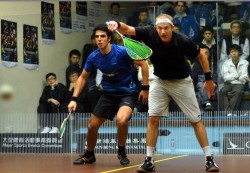 The only upset came when South African Stephen Coppinger, given a last-minute place in the main draw after the withdrawal of Dutchman Laurens Jan Anjema, battled back from a game down to beat Egypt’s world No11 Omar Mosaad 8-11, 14-12, 11-8, 11-9 in 69 minutes.

The Cape Town-based world No24 will now take on England’s world No2 Nick Matthew. The second seed from Sheffield began his bid to reach the final for the first time since 2004 by beating German number one Simon Rosner 12-10, 12-10, 11-6 in 49 minutes.