Defending champion Ramy Ashour led the seeded players into the second round on the second day of play of the Hi-Tec Australian Open in Canberra . 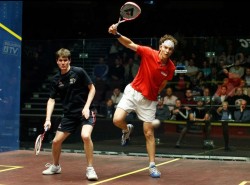 Australian number one Cameron Pilley moved a step closer to a semi-final against Egypt’s defending champion Ramy Ashour when he downed fellow countryman Matthew Karwalski in today’s first round of the Hi-Tec Australian Openin Canberra.

Pilley had too much experience for the improving Karwalski, winning in straight games 11-7, 11-5, 11-7 to claim a place in the second round of the PSA World Tour International 70 squash event at the Royal Theatre.

Top seed Ashour, the 23-year-old world No4 from Cairo, closed out the first round with a typically flamboyant 11-6, 11-6, 11-6 win over New Zealand qualifier Kashif Shuja to get his title defence underway. 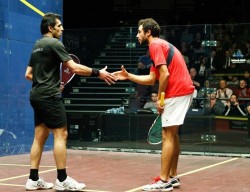 “Kashif’s a legend of the tour, he’s been around for a long time and I think we put on a good show,” Ashour said, adding that he was in great shape for the start of the new season.

“I’ve been working a lot on my body, which I haven’t always done in the past,” he said. “It’s more mental than physical but I feel great.”

Ashour will play young Englishman Olivier Pett who was impressive in his 11-4, 11-5 11-7 win over Hong Kong’s Dick Lau.

Pilley was always ahead of Karwalski, who has moved to Florida to train with former Australian number one David Palmer. The fourth seed took early leads in the first two games, then from 3-6 down in the third, he won eight of the next nine points to clinch the match.

“Matt’s improved a lot in the last 12-18 months, training with Palmer has definitely helped,” Pilley said. “He’s trying to replicate the way Dave plays and trains, so it was a good hit-out.

“It’s been a while since I played a proper competitive match so I wasn’t too sure how I was going to feel or hit it, so I was quite pleased. I’ve had worse first round results than that before.” 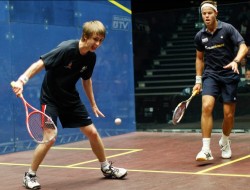 After trading two tight opening games, Alexander changed tactics at the start of the third and went on the attack, wrapping up the last two to take the contest 11-8, 7-11, 11-2, 11-3.

“I wasn’t even really playing, I was just trying to feel my way into it,” Alexander said later. “Rex is so steady and fit and patient, he’d do that all day. The problems I’ve had in the last season are because I’m not playing enough attacking squash, I’ve been trying to play a length game and beat people by doing nothing with the ball.

“I think I can move the ball around pretty well so I have to be more aggressive and more positive.

“If I can be more aggressive and open up the court more it gives me chances to end the rallies – I’m not a grinder so I have to take matters into my own hands.” 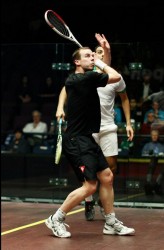 Adnan was never in any trouble as he downed the qualifier from Argentina in just 25 minutes. “I played him a few weeks ago at the Victorian Open in Melbourne and I beat him comfortably there,” Adnan said. “I was quite confident coming into the match because I knew how to play against him.”

Aziz beat Adnan at their last outing, in Qatar last November, but the Malaysian said he was confident of gaining revenge.

“I’ve been training really hard over the past few months and I have improved a lot,” he said. “My confidence is good and my fitness is good so I’m really looking forward to it.”

1st round (lower half of draw): 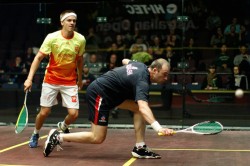 Czech number one Jan Koukal ended Mike Corren‘s bid for an unlikely second round berth at the Hi-Tec Australian Open with a ruthless 11-5, 11-2, 11-4 first round win in the PSA World Tour International 70 squash event today inCanberra.

The 38-year-old Australian provided the good news story of the qualifying tournament when he beat players almost 20 years his junior to book his spot in the main draw.

But the world number 50 from Prague was in no mood for sentiment as he took advantage of Corren’s difficulties in adapting to the all-glass court to wrap up the match in straight games.

Koukal dominated Corren with his speed around the court, his well-disguised drop shots regularly leaving the Australian stranded at the back. 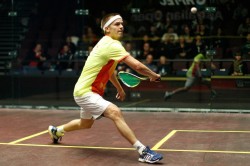 “I felt heavy and he was bouncing around as light as a feather,” Corren said. “It’s been ages since I played on a glass court, it’s so different and my regular go to shots weren’t working at all.”

Koukal said he sensed early that Corren was off his game. “On this court you have to move well and I though Mike was struggling a little bit after the couple of matches he played in qualifying,” said the 29-year-old from Prague.

“I was up for it after two months of training and wanted to make sure I had a good beginning to each game to show him I was really up for it and it would be hard for him to come back. My movement is my strength and I used it to my benefit.”

After blitzing the first game, second seed Mosaad had to push hard all the way to finally subdue his Hong Kong opponent in 37 minutes in an ominous display.

Ryan Cuskelly became the first Australian through to the second round when he beat Malaysia’s Muhd Asyraf Azan 11-5, 11-9, 11-8 in an occasionally fractious encounter.

“I’ve known him since we were juniors so I knew what to expect,” Cuskelly said afterwards. “I was a bit rusty, I haven’t played for two months and it’s been a while since I played on a glass court.” 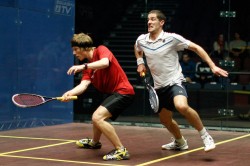 Earlier there was disappointment for the Australians when qualifier Justin Beard was bundled out by New Zealand’sMartin Knight.

Beard started nervously but came back into the match when he took the third game, only for Knight to assert control again and win 11-5, 11-9, 9-11, 11-4 to set up a second round clash with seventh seeded Scotsman Alan Clyne.

“It’s always a nervous one, the first hit-out on the glass, but I felt quite good starting off,” Knight said. “But then he recovered quite well and started to play some good squash in the next few games and I got a bit negative in the second and third games.

“After the first I probably tried to do a little too much and then tried to do not enough, I sort of got caught halfway between. If I do any of those shenanigans against Alan I’m going to be in a lot of trouble.” 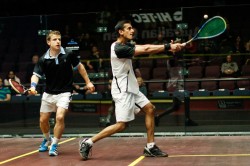 Clyne earlier beat Siddharth Suchde from India 11-7, 11-5, 11-8 in a confidence-boosting opener to the tournament in which he was always in control.

“I’m trying to hopefully get through a few rounds so to spend as short a time on there as possible is what you want,” Clyne said. “I’m pleased it was three-love and I felt quite good out there. At the start of the game I wasn’t too sure of myself but once I got going and got the first game under my belt I felt more comfortable.

“The second game I was good from the start and then I slackened off a bit at the end of the third but overall I was happy.”

Third-seeded Englishman Tom Richards survived a heavy collision with the side wall during his 11-7, 11-7 14-12 win over Malaysia’s Kamran Khan. 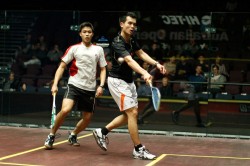 At 9-9 in the third, Richards was wrong-footed and dived into the wall, resulting in a three-minute injury break. But when he returned he was able to save game ball and eventually win a tense match in the tie-break.

“The tour is so strong now that there are really no easy matches at big tournaments,” he said. “I skipped the Olympics and spent some time in Malaysia so I could get my body used to the time zone.”