The top eight seeds took their places in the quarter-finals of the $147,500 Qatar Classic after contrasting second round wins in the ninth and penultimate 2010 PSA Super Series squash championship at the Khalifa International Tennis & Squash Complex in Doha. 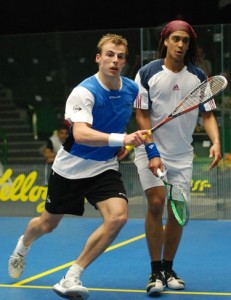 “It’s not as awkward it was to play Ali, as we don’t train three to four times a week anymore, so he surprised me with a few things I forgot he did – then I surprised him with a few things I did,” Matthew explained to www.squashsite.co.ukafterwards. “The second was crucial – I think that if he’d won that one, he would have taken a lot of confidence, and it would have become a hard match.”

“I’ve worked pretty hard this week I would say,” exclaimed the eighth seed from Essex after reaching his second successive Super Series quarter-final.

“Cameron hits the ball so well, he is such a great player. He’s got one of the best forehands on the circuit, and everybody knows that. He played some stunning winners tonight, but luckily, I managed to weather the storm.” 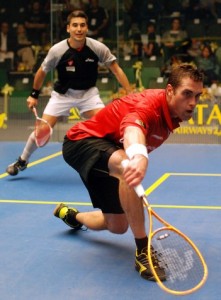 Another Australian campaign came to an end when Frenchman Thierry Lincou beat fellow Tour veteran David Palmer 8-11, 11-4, 11-5, 3-11, 11-5. The bruising 75-minute defeat leaves Palmer needing to do well in the final Super Series event of the year in Delhi in order to qualify for next year’s World Series Finals in London.

“Today, he was just too good, far too good,” said a dejected former world champion and world number one Palmer later.

“Things haven’t really gone my way this year, and I haven’t hit the ball enough since the Commonwealth Games – it showed today. Physically, I was fine, but Thierry was in total control, and that’s his trademark.”

“I played him only once before, in Saudi last year, and he took me by surprise – his speed, especially for a big guy, is just excellent,” said Londoner Barker, the sixth seed. “I wanted to win, to get back on parity, and I was expecting a tough match, it didn’t disappoint!”