The top eight seeds will contest the quarter-finals of the JP Morgan Tournament of Champions after contrasting successes in the second round of the PSA World Series squash event at Grand Central Terminal in New York.

Veteran David Palmer, the Australian who has played in every Tournament of Champions since 1995, reproduced the form that kept him in the PSA top ten for a full decade. “David takes everything early,” said Palmer’s opponent Tom Richards after the match. “He is always in front, taking your game away.” 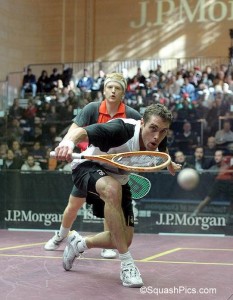 The players exchanged the lead several times in the first game until Palmer snatched victory at 12-10. As they played further into the match, Palmer’s precision forced the English qualifier back on his heels. Unable to get ahead of Palmer, both literally and figuratively, Richards’ Tournament of Champions debut ended as Palmer went on to win 12-10, 11-9, 11-8.

“I played pretty well at the end of the games,” said a satisfied Palmer after the match. Referring to the fact that his next opponent is top seed Ramy Ashour, the 34-year-old he continued. “It is nice to make it to the quarter-finals – there’s no pressure now going forward.”

Egyptian favourite Ashour dropped the first game to Australia’s Stewart Boswell. “He went for a lot of shots in the first game and missed,” said Boswell after the match. “But I l knew that he was only going to get better as the match progressed.”

The creative, shot-making Egyptian did find his stride in the second game and, for the remainder of the match, the 32-year-old Australian only held the lead once more at 7-6 in the fourth. “I really enjoyed playing today,” said Ashour, who struggled with injuries at the end of 2010. “I haven’t been enjoying myself for the past two or three months. But this court and these fans and this atmosphere give you the energy to produce better squash.”

Ramy’s older brother Hisham was not as happy at evening’s end when he found himself on the losing end of a five-game, physical barnburner with England’s Peter Barker, the tournament’s fifth seed. With the first four games being decided by a mere two point margin (three in tie-breaks), it was truly either player’s match to win.

“Hisham has been playing awesome squash in the past few months, and I was thinking too much about winning and losing in the first two games,” said Londoner Barker. “When I was down 0/2, I had to dig deep and just focus on not losing.” The 27-year-old left-hander used solid, straight length to counter Ashour’s dynamic shot-making and broke open the match in the fifth game, winning it 11-2. 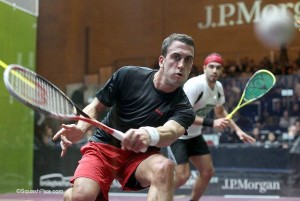 Barker’s next opponent is world number one Nick Matthew, who defeated friend and training partner Alister Walker 11-5, 11-8, 11-5. As Walker was cooling down on the training bicycle after the match, Matthew walked by and Walker called him over: “Your length was amazing tonight,” Walker said to the Yorkshireman. “That is the best you have ever played against me – it was pure measured squash.”

Another player who felt he had an especially good showing was fourth seed Amr Shabana. “I played three games as well as I could play,” said the two-time Tournament of Champions title-holder after defeating England’s Daryl Selby 11-6, 11-8, 11-8. 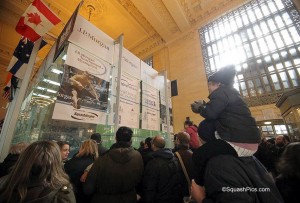 His opponent concurred: “Today Amr showed why he was world number one,” said Selby. “Any ball that I hit loose, he put in the nick.” The 31-year-old Egyptian will next face Dutchman Laurens Jan Anjema who defeated Swiss qualifier Nicolas Mueller 11-9, 11-4, 11-3.

Anjema attributed a bit of a sluggish start to jet lag and waiting for the 81-minute Ashour-Barker match to end. “The first game was a good shock to my system to get me going,” he said with a wry smile after the match.

Seventh seed Mohamed El Shorbagy rounds out the trio of Egyptians in the quarter-finals after defeating Canada’sShahier Razik 11-9, 11-5, 11-6. He will contend with defending champion James Willstrop, who defeated qualifierBorja Golan 11-6, 11-4, 11-6.