Rising German squash star Simon Rosner celebrated his first appearance in the quarter-finals of a PSA World Seriesevent after beating world No16 Alister Walker in the second round of the Davenport North American Open at theWestwood Club in Richmond, Virginia. 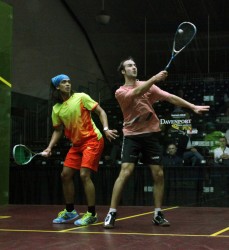 The 6ft 3in 24-year-old from Paderborn overcame Botswana’s Walker 11-6, 11-6, 11-6 to record his career-first victory over the former world No12 with a consistent display of solid hitting and confident court movement.

Rosner, ranked 20 in the world, will now face No2 seed Nick Matthew. The world champion again made life difficult for himself, struggling against Finland’s Olli Tuominen before winning 11-9, 4-11, 11-8, 11-2 in 55 minutes to finally force his way through to the last eight. 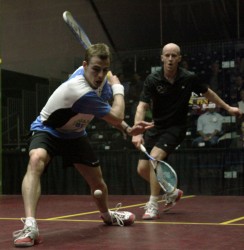 “I was actually thinking too much and couldn’t get my head straight,” said the Englishman, ranked one in the world. “It’s not what I wanted with all these long matches on the midnight shift, having seen guys like Greg and Ramy winning quickly in the afternoon matches.

“I know I will need to play better against Rosner,” added Matthew. “He is playing well and looking relaxed. We played each other in the World Team Championships in Paderborn and it felt like the whole of Germany was against me!” 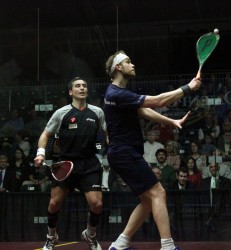 The 28-year-old Englishman weathered the storm to complete a straight-games victory over the former world number one who is still performing at a phenomenal physical level at the age of 35. He now faces another squash legend Amr Shabanain the last eight.

The Frenchman again led 6-5 in the second game but Willstrop finished strongly to win 11-7. The tall Englishman built a strong lead in the third but at 9-2 down Lincou continued to compete for every ball and made the scoreline more respectable with some superb winning shots. 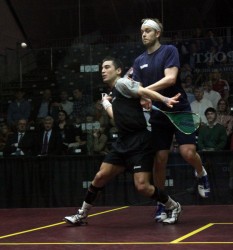 Willstrop finally completed a 16-14, 11-7, 11-6 victory in 50 minutes and afterwards he paid tribute to his opponent, and the man he faces in the quarter-finals.

“We are fortunate to have such great players in our game, men who are fantastic competitors, gentlemen both on and off the court and act as superb role models and ambassadors in our sport,” Willstrop explained.

“Thierry has always been an inspiration for the way he plays the game and conducts himself, and the way he is still competing deserves enormous respect. 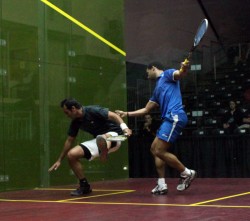 “As for Amr, he has won four world titles and is still continuing to operate at the highest levels. Some people attempt to write off these guys, simply because of their age, but that is just a number, nothing more. They continue to inspire but I have just beaten one of them and have a job to do tomorrow and will have to be at my best to win again.

“Fortunately I am feeling strong and winning long games gives you the confidence to push through.” 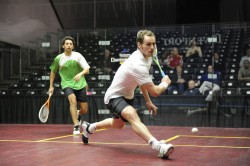 Gregory Gaultier powered his way through to the quarter-finals by overwhelming Canadian Shahier Razik in just 29 minutes. The French maestro looked very sharp indeed as he won 11-1, 11-4, 11-4.

After the match he said: “I am feeling good and learning how to look after my body a lot better than I used to.”

Ramy Ashour was ten minutes late on court but attacked right from the start against Cameron Pilley. The 24-year-old Egyptian won 11-6, 11-7, 11-9 in just 28 minutes. 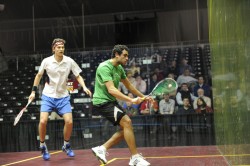 Both players produced fast, attacking squash but Ashour was always likely to be the man hitting more winners. Pilley fought hard at the finish and had Ramy diving all over the court in to one rally, only to hit the ball back to himself to concede a penalty stroke.

Ashour, who is returning to action after injury, echoed Gaultier’s comments about diet and fitness. He said: “I love the food here in Richmond so I have to be very careful about what I eat and how much.

“I always enjoy playing Cameron. He is a great professional and hits the ball very well. I treat every player with respect.” 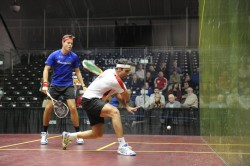 Darwish said: “Zac is a very strong player and improving all the time. I am looking forward to playing Ramy. He is one of my best friends. All the Egyptian players are very close. The last time I played him, I lost 3/2 in Hurghada. We always have close matches.” 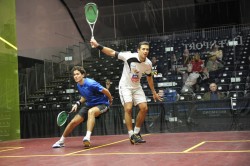 Number eight seed Mohd Azlan Iskandar conceded his match against young Egyptian Karim Abdel Gawad because of a thigh injury. The Malaysian world number ten stayed in his chair after losing the first two games and said: “I have been suffering for a few days and trying to play through it. The adductor muscle is causing the problem and it started bruising badly.”

This will be the 20-year-old’s first appearance in a World Series quarter-final. He is already used to the glass court on the big stage, having led Egypt to success in the WSF Under-21 World Cup earlier this month in Chennai, India. 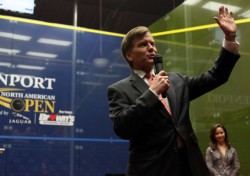 During the day, the Governor of Virginia Bob McDonnell was welcomed to the Westwood Club by an enthusiastic audience.

The Governor officially proclaimed February 22 as Virginia Squash Day and said how pleased he was that Richmond hosted such an outstanding annual event that attracted the world’s leading players to the Commonwealth capital.

The success of the tournament has resulted in a steady increase in participation figures accompanied by the building of new squash courts throughout Virginia.