Simon Rosner and Kasey Brown made unexpected progress to the U.S. Open quarter-finals in Philadelphia …

Rosner Reaches Goal At US Open 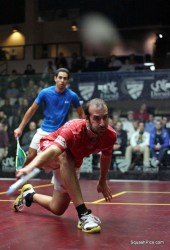 Germany’s Simon Rosner achieved his goal to reach the quarter-finals of a PSA World Series event when he upset eighth-seeded Egyptian Tarek Momen on the second day of last 16 round action in the Delaware Investments U.S. Open Squash Championships, the fifth PSA World Series event of the year at Drexel University in Philadelphia.

In a clinical opening game, world No12 Rosner – ranked just a single place below his opponent – put on a dazzling display of length followed by precise drops to both sides of the court. The 25-year-old from Paderborn followed a backhand boast with a straight volley drive that took him to 9-7. 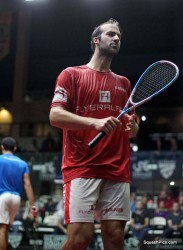 Momen, who like Rosner was looking to make his first appearance in the US Open last eight, saved two game-balls in the second to draw level.

After a surprising third in which Rosner reclaimed the lead after just four minutes – conceding a mere two points – the fourth was a cat-and-mouse affair with the pair trading point for point. But three unforced errors from Rosner handed Momen the lead at 9-8.

The German slowed down the game, however, with balls tight on the backhand wall followed by straight forehand drops – taking the next three points in spectacular fashion to secure his place in the quarter-finals.

“I felt I had to stay straight with the drop shot. There’s no point in playing to the back if your short game is going so well like mine was today.

“This is only my second World Series tournament to reach the quarters. I’ve been in the quarters twice in the North American Open, so it seems like I play well in America!” 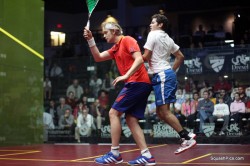 Rosner will now face James Willstrop, the second seed from England who eased to an 11-7, 11-9, 11-4 win over 22-year-old Egyptian Karim Abdel Gawad.

“It’s never easy against any of these up and coming players,” said Willstrop, the 30-year-old world No3 from Harrogate. “You just have to try to keep your head, dig in and try to keep winning points.

“It’s such a great event here, the venue is wonderful, it’s a great city to come to, and the Philadelphia crowd is really knowledgeable about their squash.

“For the next round, Simon is another of the gaggle of hungry up and coming players, he’s fast, plays at an intense pace and he’ll be taking the game to me for sure!” 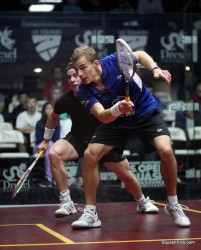 The other quarter-final line-up settled will produce a certain English semi-finalist after third seed Nick Matthew takes on England team-mate Peter Barker, the No6 seed.

“He’s one of those players who can keep going at the same level for two hours,” said former world number one Matthew. “So I knew I had to get on top from the start and I was pleased with how I did that, but he was still going strong at the end.

“Maybe I let my opponent off the hook a little in the last round, and it became a tough match, so I wanted to make sure that didn’t happen again.” 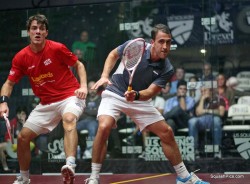 Londoner Barker was involved in a domestic clash with rising London-born Joe Lee – in, surprisingly, their first ever meeting. In the last match of the day, the experienced world No7 Barker had to fight back from a game down to overcome Lee, ranked 27 places lower, 8-11, 11-2, 11-6, 11-4 in 66 minutes.

“Joe’s fit and strong, he’s coming up the rankings fast and it takes a long time to wear him down these days,” said Barker later.

“I’m glad everyone stayed to watch, especially after that first game,” he quipped. “It was pretty long and attritional. Joe will be happy with how he played in that one, it’s usually my strength, but I was glad to be able to come back and take the next three.”

Brown Brushes Aside Duncalf In US Open Upset 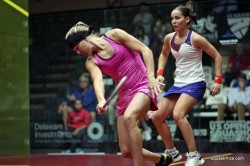 Australia’s Kasey Brown produced a resounding upset in the second round of the Women’s Delaware Investments U.S. Open Championship when she despatched seventh seed Jenny Duncalf in straight games to claim an unexpected place in the quarter-finals of the Women’s Squash Association World Series Platinum event which – for the first time ever – is providing equal prize money to the men’s event. 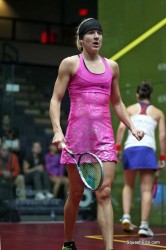 Brown, the US-based world No11, went into the match 1/8 down in her head-to-record with Duncalf – her only win against the world No6 from England coming exactly three years ago.

A series of unforced errors by Duncalf gave Brown, the runner-up two years ago, the opening game.

Duncalf settled after that, taking a lead of 4-1 in the second. The 28-year-old from New South Wales drew level at five-all before going on to extend her lead to 2/0.

Duncalf again led in the third, but Brown caught up at six-all before racing on to match-ball at 10-7. Duncalf won the next three points to level, but a powerful drive took Brown to the brink again before a stroke sealed the upset.

“This place holds a special place in my heart,” admitted a delighted Brown after her 11-4, 11-7, 12-10 victory in 41 minutes. “After 2011, and being sponsored by Delaware Investments, plus I always seem to play well on this court.

“It feels great to be able to pull it out today. I’ve been working on a few things to help me out in tight matches like this and that certainly helped me pull through at the end.” 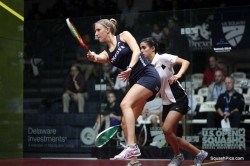 Brown moves on to meet her third successive English opponent – second seed Laura Massaro – in a repeat of the 2011 final.

“I hadn’t played Nour for such a long time and she took me by surprise in the first,” admitted Massaro later. “I was pretty terrible in that game though! After that it turned into a bit of a catfight, I had to really gee myself up to stay in it.

“I’m happy to get through that one, hopefully I can refocus for the quarters now.” 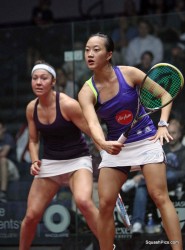 “Playing on the glass court is so different,” said Low  after her first ever meeting with the US number one. “And if you give Amanda anything loose she’ll punish you.

“I just couldn’t get it past her in the first, but with Nicol giving me advice I started to step up more – playing a bit more like she does! This court is punishing if you get stuck at the back, so I’m glad I was able to change it around.” 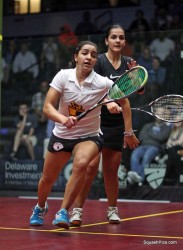 Wee Wern will now meet Egypt’s Raneem El Weleily for a place in the semi-finals after the world No3 from Cairo survived a five-game battle with compatriot Omneya Abdel Kawy, a former world No4.

“Playing a friend is the hardest thing you can do in a tournament,” said victor El Weleily. “I was so nervous, just trying to stop making mistakes and I was so, so, lucky in the end.”