Colombian Miguel Angel Rodriguez celebrated his first Tour meeting with Mohd Ali Anwar Reda in the first round of the Delaware Investments US Open by beating the higher-ranked Egyptian in a dazzling performance in the fifth PSA World Series squash event of the year at Drexel University in Philadelphia.

Displaying some extraordinary running, retrieving, leaping, diving and unorthodox shot-making, the world No30 from Bogota got the better of Reda, ranked six places higher, in a magical five-game match.

It seemed that the 22-year-old from Cairo had weathered the storm as he edged the second to level the match and eased through the third. 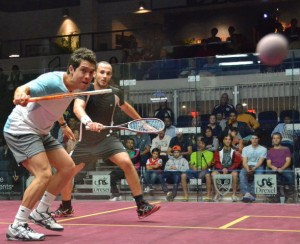 But there was no stopping Rodriguez: “I particularly loved his 360-degree spins, and the drop shot he plays while running backwards, having dashed to the front after his opponent’s high boast before engaging reverse gear,” said event spokesman Steve Cubbins.

Event MC Bryan Ramona was also clearly impressed by Rodriguez: “We’ll have to call you ‘the Cat’ after that display.”

But there was disappointment for Egypt’s Karim Darwish when the second seed was forced to retire against Mohd Azlan Iskandar with an ankle injury. The Malaysian went into the match 8/0 down in a career head-to-head record since 2003 – but after leading 2/1 and 7-2 in the fourth, the Sarawak-born 29-year-old celebrated his maiden success when Darwish conceded the match.

Iskandar will now meet Nicolas Mueller after the Swiss number one became the only qualifier to claim a place in the second round when England’s Jonathan Kemp was forced to pull out with a back injury. 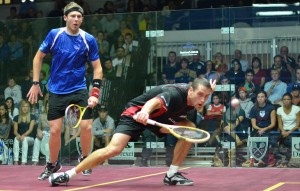 US-based Australian number one David Palmer made sure of his last 16 place with a straight games win over fellow countryman Ryan Cuskelly. But despite coming through two tough qualifying matches, the world No42 put up a good show against experienced eighth seed Palmer, three times a finalist and winner of the US Open title in 2002.

“I knew he’d keep fighting,” said Palmer after his 11-8, 11-9, 11-9 victory in 51 minutes. “I was a couple of points behind in the second but managed to his some winners at the end, which was crucial, and I probably relaxed a little after getting a good lead in the third, but I thought I played pretty well to get to that point.

“If he keeps on playing with an attitude like that, it will go well for him in the future.

“I can’t afford long matches,” added the former world number one. “At 35, I need to win 3/0 when I can, so it was good in the end and I’m looking forward to coming back tomorrow.”

“Chris is very clever tactically,” said Anjema. “So I had to try to get the upper hand early and try to put him under pressure physically.

“It was a bit too chaotic for my liking at times, but I’m happy with how I played and pleased to get off with a three-nil win.” 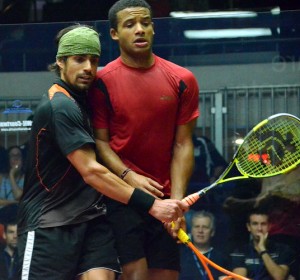 “He’s very unorthodox and hard to read – it took me a game and a half to work him out,” admitted Londoner Grant after ending Delierre’s run in his first World Series appearance since 2008.

“Once I found my feet I managed to present my game to him and I felt more and more confident,” added Grant.

Shabana was meeting El Hindi for the 15th time on the Tour since 2001: “It’s always difficult playing someone you know so well,” said the 32-year-old four-time world champion. “Wael hasn’t played a lot of squash in the last six months, and is just coming back, but he still made it pretty difficult for me at times.”

In the qualifying finals for the WISPA $60,000 event, the richest-ever women’s US Open, Australia’s Donna Urquhart won her all-left-handed battle with Joey Chan, while Delia Arnold and Dipika Pallikal both squandered match ball opportunities to win in straight games before beating Victoria Lust and Low Wee Wern, both in four games.

Once again it was left to new Harvard student Amanda Sobhy to keep US interest alive, and she didn’t disappoint, with a tough five-game victory over New Zealand’s Jaclyn Hawkes which set up a meeting with world number two Jenny Duncalf in tomorrow’s first round.