Egyptian squash genius Ramy Ashour showed he is back on top form by crushing world champion Nick Matthew to reach the final of the Davenport North American Open in Richmond, Virginia.

Ashour, the 24-year-old world No5 from strife-torn Cairo, has impressed all week on his comeback after injury. But against Matthew, in the PSA World Series event at the Westwood Club, he stepped up a level with a performance that left England’s reigning champion exhausted after two games.

Ashour meets top seed James Willstrop in the final and will have another point to prove with the Englishman returning to the top of the PSA world rankings in March.

Willstrop wore down French No4 seed Gregory Gaultier with a commanding performance in a 97-minute marathon that justified his status. That was impressive enough, but the Westwood Club crowd went wild at Ashour’s high-octane display. 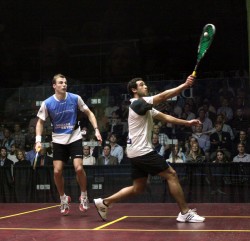 The Egyptian fought back from 10-7 down in the first game to win 12-10 and produced a phenomenal recovery to win the second 13-11 after being 8-4 down. Matthew was demoralised after blowing two crucial leads and fell away badly in the third. Ashour took less than six minutes to win the third and complete victory in 52 minutes.

Diving around the court to retrieve what looked like certain winners, the Egyptian played shots behind his back and conjured up a succession of astonishing winners that drew admiration from his fellow professionals.

Indian number one Saurav Ghosal Tweeted: “That proves Ramy is an alien – he plays squash from another planet.”

Ashour himself said: “I am so happy to be in the final and playing James. I want to thank everybody back home for helping me to get fit and my brother Hisham for helping me this week.

“It should be a great match against James,” added the former world number one, now in his 36th Tour final. “He is a fair and honest player and we always have close games.” 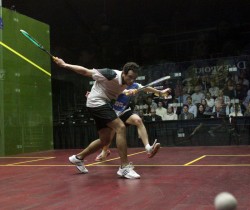 Matthew admitted: “Ramy was too sharp tonight. I have got some important lessons to learn from that. It was hard to push on in the third when I could and possibly should have been 2-0 up. I was weak in the third, though. I didn’t help myself with the amount of time I spent on court in the early rounds. I can’t beat Ramy like that. He’s too good.”

Matthew’s English rival Willstrop was also in outstanding form as he completed his fourth consecutive victory over Gaultier to reach his first Richmond final since winning here in 2008, against the Frenchman. 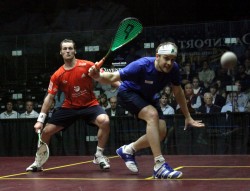 After the opening two games took almost an hour to complete, the 6ft 4in Willstrop’s superior strength was clearly evident as he dominated the third and fourth. Seven inches taller than Gaultier, the Yorkshireman appeared to physically intimidate his opponent, who complained to tournament referee Mike Riley that his path to the ball was being blocked.

However, in the later stages of the match the issue was fitness and conditioning, and that’s where committed vegetarian Willstrop had the edge.

The battle was the second longest four-game victory of Willstrop’s career – his longest (at 99 minutes) being only two months away, and also against the Frenchman!

A year ago, Willstrop was left exhausted by the enormous demands of endless matches and gruelling travel schedules. 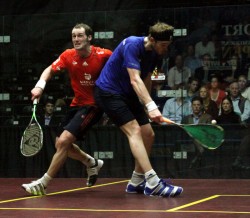 He admitted: “I suffered a bit of a meltdown when all the matches and the flights caught up with me. Since then I have tried to be a bit smarter with the way I do things.”

The 28-year-old from Leeds – who is celebrating the 30th Tour final of his career, and his sixth over the past eight events – added: “I am very satisfied to beat the world number three and looking forward to the final.

“It’s been a long time since my last one. It’s great to have Ramy back in action this week, hitting nicks from everywhere and entertaining the crowds.”