Third-seeded Englishman Tom Richards ended local hope Ryan Cuskelly‘s bid for success in the Hi-Tec Australian Open when he beat the Australian in four games in today’s second round of the PSA World Tour International 70squash event in Canberra.

Cuskelly was matching it with his higher-ranked opponent for the first two games, but when Richards changed his game plan at the start of the third, the Englishman was able to take control over his increasingly frustrated opponent.

“He was playing really well at the end of the second, hitting nicks and winners, so I went back to basics,” Richards said. “I decided to be patient and wait for the best for the best opportunities to go in and attack.

“I knew on paper that Ryan was one of the toughest players to draw in the second round, so I was mentally prepared for it tonight.” 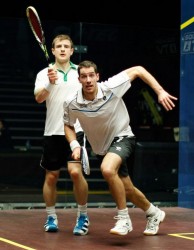 Clyne and Knight were evenly-matched throughout and the New Zealander had three game points to make it two games apiece. But Clyne battled back to save all three then take the match in a tie-break.

Second seed Omar Mosaad was also taken to four games by Czech Jan Koukal. After winning the first two games relatively comfortably, the world No12 from Egypt had to hold off an inspired fight back from the Czech and was lucky not be taken to five games by an opponent ranked 38 places lower.

Mosaad now takes on Malaysia’s Ong Beng Hee, who was the first man through to the quarter-finals when he beat Egyptian teenager Amr Khaled Khalifa 11-9, 8-11, 11-7, 11-7. 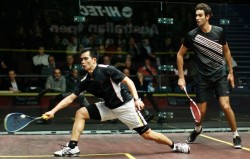 The former world No7 was able to subdue the shot-making of 19-year-old Khalifa to wrap up well-deserved victory.

“I was pretty confident going into the match,” said the Penang-born 32-year-old. “After my performance yesterday I felt pretty good on court – I’m feeling a bit more comfortable as the days go by but I think the pressure was still on me today because I was playing an extremely talented young Egyptian.

“He’s only 19 years old and absolutely talented with his racquet, so skilful. I think my experience got me through, especially on the bigger points so I’m quite happy with my performance.

“It’s a long time since I’ve been in the quarter-finals of a major event – I’m very pleased.”

It was a good day for the youngsters in the first round of the Hi-Tec Australian Open, as Harvard Sophomore Amanda Sobhy and England’s Emily Whitlock upset the seedings. Sobhy, the 2010 World Junior Champion made short work of 14th seed Joey Chan of Hong Kong. The 19 year old, currently ranked no.26, was at a ranking high of no.17 last year before College commitments have stopped her playing a full season on tour. Whitlock, the recent World Junior semi finalist, went the distance with Jaclyn Hawkes of New Zealand, twice coming from a game down to record her first top 20 win. Sobhy will now play second seed Jenny Duncalf while Whitlock will play third seed Laura Massaro in the last 16. 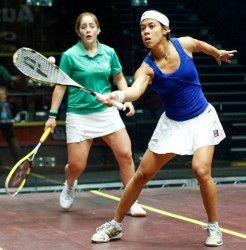 Elsewhere, World No 1 Nicol David didn’t have it all her own way against 19 year old Tesni Evans of Wales. David won the opening game handily before Evans stormed back to take the second game. David closed it out 11-8 in 4th against an inspired opponent. “I was working hard the whole match to win that one,” David said later. “You can see what she can do with the ball, she’s a real talent. Every point counted, she didn’t give up any point easily. I just had to hang in there and stick to my game.”

On form Alison Waters took out no.15 seed Delia Arnold. On paper this is an upset but the former World No 3 has won her last 4 tournaments and is certainly the player to avoid. 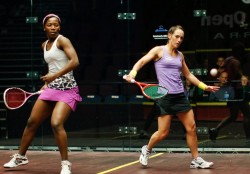 Australians Kasey Brown, Rachel Grinham and Donna Urquhart all came through their matches in 3 games. Grinham and Urquhart now face each other for a place in the quarter finals, while Brown takes on 2009 Champion Kiwi Joelle King who needed four games to beat Czech qualifier Olga Ertlova. There was almost a fourth Australian player into the second round when Sarah Cardwell twice led no.16 seed Emma Beddoes before eventually succumbing to the athletic English girl in the fifth.