Producing one his best results for almost a year, Egypt’s Amr Shabana defeated Englishman James Willstrop in the $147,500 Qatar Classic to reach the semi-finals of the ninth and penultimate 2010 PSA Super Series squash championship at the Khalifa International Tennis & Squash Complex in Doha.

According to the seedings, third seed Shabana was expected to beat the 27-year-old from Leeds – but Willstrop is currently ranked above the four-time world champion and has achieved three successive wins over Shabana since last losing to him in the 2009 World Open in Kuwait. 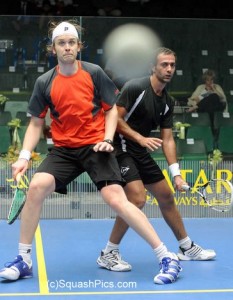 “At the start, he played well, but especially, he stuck to his game plan, while I didn’t stick to mine,” Shabana told www.squashsite.co.uk afterwards. “I developed a sort of mental block for a few times I’ve been playing against him – but, after a while, I just thought to myself, I might as well play, I’ve got nothing to lose. And from that point on, it was pretty close.

“You’ve got to be careful with James, because he can shut you out if he gets into a zone. I was playing every point not caring if I won or lost, just playing each and every one of them.

“So I’m really proud that I succeeded to stick in there today.”

Willstrop was full of praise for his opponent: “Hats off to him – he keeps being written off and he keeps coming back. He is obviously back into a good physical shape. I watched him last week in Kuwait – his matches were just before mine – and watching him just helped me. Nobody strikes the ball better.

“I have an immense respect for the guy, he’s got an outstanding attitude on court. I absolutely hate losing to anyone, but there is nobody I’d rather lose to.”

Shabana will now face French rival Gregory Gaultier in a repeat of last month’s Kuwait Open semi-final. The fourth seed from Aix-en-Provence beat England’s Peter Barker after the sixth seed retired injured after just 28 minutes with the score standing at 11-4, 11-1.

“My ‘glute’ packed up in the middle of the first game,” explained Barker afterwards. 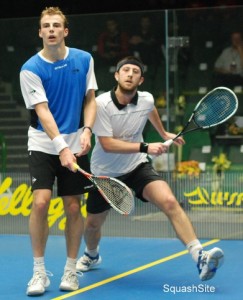 There will also be Egyptian interest in the other semi-final when third seed Karim Darwish takes on Nick Matthew, the top seed from England.

“What happened last time was in my mind, of course, but it was different this time,” said Matthew after his revenge win. “It’s hard to do what he’s done in the last couple of days and pitch up again.

“I wasn’t in any mood to let him settle into any slow rallies which might have helped him loosen himself up, and on an unforgiving court like this he was having to stretch for it instead of counterattacking as he likes to do. The pressure kept building and I knew the opportunities for winners would come.”