Top seed Ramy Ashour was too quick, too strong and just too good for second-seeded Englishman Nick Matthew in the final of the JP Morgan Tournament of Champions, the PSA World Series squash event at Grand Central Terminal in New York.

The 2008 champion from Egypt added a second Tournament of Champions trophy to his collection as he defeated the current world No1 11-3, 7-11, 11-9, 11-7. Winning his second title in New York was made extra special by the fact that Ashour’s mother (who hadn’t seen her youngest son play a major match in five years) was in the audience.

The big question on everyone’s mind was whether Matthew would have enough gas left in the tank after his epic 88-minute semi-final clash with Amr Shabana just 24 hours prior to his final showdown. During the warm up, Matthew appeared confident and composed while his Egyptian rival seemed edgy and nervous. Matthew calmly waited at the end of the warm up for Ashour to return to the court, which he did only after the referee’s final call for his return. 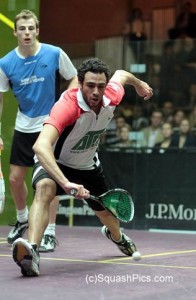 After the match, the fast-talking Ashour explained that the edginess was a good thing: “For me, to play well, it is a balance. I have to be alert on court, feel the pressure and also be a little anxious and scared,” explained the 23-year-old from Cairo.

Once on court for the first game, Ashour was bursting with energy, jumping out to a 7-1 lead before winning the game. In the second, it was Matthew who came out strong, taking a 6-2 lead before going on to level the match.

In the third and fourth games, Ashour took slight early leads which he maintained for the duration of each game.

“I was always playing slight catch up through the third and fourth games,” admitted Matthew later. “Just when I thought I could change the momentum, Ramy would have a trick up his sleeve to push ahead.”

The tricks up the Egyptian’s sleeve included continuing changes of pace and the flat flick that he would hold until Matthew was leaning in one direction, and then wrong-foot the Englishman by flicking the ball to the opposite side of the court. 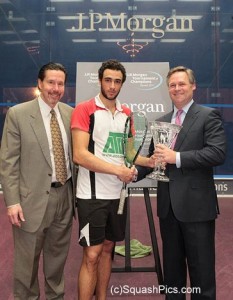 “Nick moved me to a lot of corners,” said Ashour post-match. “The really good thing about tonight was that I was moving well and in touch with my body.” The injury-prone Ashour, waylaid by year-end injuries, was most pleased to be feeling physically good and moving to the ball with ease.

Runner-up Matthew was also pleased that Ashour was injury-free. “It is good to have Ramy back on the tour. He is a much more exciting player to watch than I am.”

As he presented the winner’s trophy on behalf of JP Morgan, Jay Horine announced that a total of $15,000 would be donated to tournament charities StreetSquash in conjunction with the inaugural JP Morgan Charity Challenge – Scoring Points for Urban Youth Education.

Ashour dedicated his victory – his 19th PSA World Tour title, and the 13th World Series crown of his career – to his home country of Egypt.