Ramy Ashour kept alive hopes of a repeat of the all Egyptian 2010 final when he upset second-seeded Frenchman Gregory Gaultier in the closing quarter-final of the El Gouna International Open, the third PSA World Series squash event of the year at Abu Tig Marina in the Red Sea resort of El Gouna.

The 24-year-old from Cairo delighted the home crowd with a blistering attacking display against fellow former world number one Gaultier in a match featuring many long rallies and some scintillating winners, plus a few slips and stoppages in the blustery conditions. 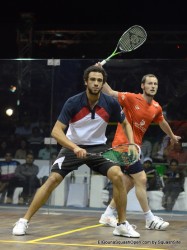 “To be fair, the Frenchman was equally impressive for most of the match, but Ashour found the necessary extra when it mattered, particularly at the end of the second game when he took four points in a row to take a crucial advantage,” said an event spokesman. “He finished off the match in style too, with a service return into the nick!”

Ashour, who earlier in the week admitted a new dedication to his sport, was almost entirely happy with his 11-5, 12-10, 11-8 victory in 58 minutes: “It was a great match,” said the fifth seed. “I’m very happy about everything but one; that it’s not the final!

“He played very well, and I’m very happy with my performance, we always seem to stretch each other. But I feel that the second was crucial, I was down, and the way I came back, I’m really happy with that. So, I’ll have to stay focused for tomorrow, and the day after,” added the 2010 runner-up.

Ashour will now face third seed Nick Matthew, the English rival who succeeded him as world number one throughout 2011. 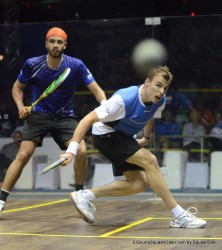 The Englishman was a different proposition, however, controlling the play and limiting the 29-year-old’s attacking opportunities.

The Egyptian’s chance came when he was 10-6 up in the second game, but a run of six points from Matthew gave him a 2/0 lead and the momentum to open up a gap in the third which unseeded Ashour was unable to close down.

“I’m pleased to beat Hisham any score, but 3/0 is perfect as it keeps me fresh for tomorrow,” said the 31-year-old from Sheffield. “But it was at no point an easy match, had he won the second, not sure what would have happened.”

The other semi-final will also be an Anglo/Egyptian affair, between England’s top seed James Willstrop and title-holder Karim Darwish. 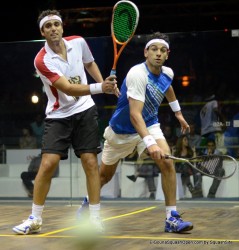 The 30-year-old from Cairo was the first player to reach the semi-finals after seeing off a typically determined challenge from fellow Egyptian Mohamed El Shorbagy.

The pair shared the first four games with hardly a point to separate them, each game taking around a quarter of an hour. It was the experienced Darwish who made the move in the decider as the play opened up, going 9-6 ahead.

As Darwish struck a winner to reach match ball, his 21-year-old opponent slipped in the back corner and looked to be in considerable pain. After three minutes recovery time he came back for one more point, which Darwish quickly finished to clinch his marathon 11-9, 9-11, 11-9, 6-11, 11-6 victory in 84 minutes.

ard match, and we played all the way through point for point,” said Darwish later. “Mohamed is a young player, so hungry, he wants to beat everybody. And today, I really had to dig in, from the first to the last point. I feel sorry for him on that last point, and I hope it’s not too bad. As for myself, I’m so happy to be in the semis, and I’m enjoying the tournament.” 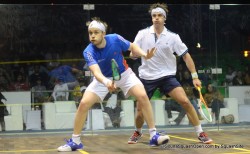 World number one Willstrop faced an early onslaught from Dutchman Laurens Jan Anjema, who let out a delighted yell as he took the 28-minute first game. The Englishman quickly put himself back in the driving seat though, dominating the second and always keeping a cushion in the third game.

“It was very tough indeed, happy to get out 3/1,” said Willstrop. “The first game was massive, it certainly cooled down after that, it was like two different matches. I think the first took a long out of him, I was pleased with what I was doing, but I lost it. So, I didn’t panic, I actually relaxed a bit, and loosened up.”