A “horribly disappointed” James Willstrop was forced to concede the El Gouna International Squash Open title midway through the third game of the final in the Red Sea resort of El Gouna, allowing Ramy Ashour to maintain Egypt’s grip on the PSA World Series trophy. 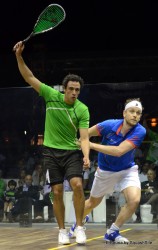 It was the second night that court cleaners had worked overtime to clear the court floor of sand blown into the all-glass court in the open air at Abu Tig Marina.

In the first game, which was punctuated by stoppages as the court was cleaned and the players occasionally stepped out of the side doors to clean their shoes, English favourite Willstrop had mostly contained the attacking opportunities of his fifth-seeded opponent – much as he had done in their previous meeting in February’s North American Open final. 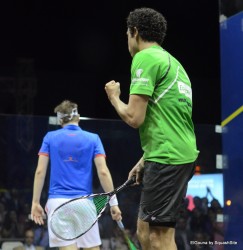 As the game neared its conclusion though, Ashour managed to raise the pace with often brilliant attacking play and delicate flicks and drops, and Willstrop began to struggle to contain him.

The Englishman’s slender lead was whittled away and Ashour took the game 12-10 with a joyous pump of the fist.

The momentum was now with the 24-year-old from Cairo as Ashour dominated the second game to take a 2/0 lead – and, amid more stoppages, build up a 5-2 advantage in the third.

World number one Willstrop approached his opponent at the front of the court, explaining that he was struggling with the conditions and felt unable able to continue, and offered his hand to the new champion. 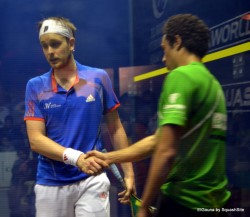 “Horribly disappointed – at times like this, losing is not the problem,” said the 28-year-old from Leeds afterwards. “I can’t explain. Losing having given your 200% is just 20 times better than the frustration I’m feeling right now. It feels like the chance to compete in a major final has been taken away from me.

“I just never felt steady on there from the third rally in the first game.

“So I found myself thinking about the floor, and not about my squash. So I’m thinking – ‘what am I doing?’.

“Ramy didn’t seem to be as much bothered, but then again, he obviously handled the floor better than I did tonight. 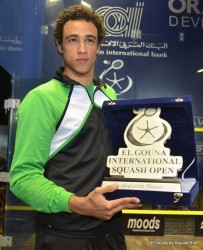 Ashour was delighted to be the champion, but was understandably muted in his celebrations.

“I feel strange/happy. I feel good because I’m happy with the way I played all week,” explained Ashour, winner of his first World Series event of 2012. “I’ve been consistent from the first match to the last one, and that doesn’t normally happen to me.

“With all what happened this week – on, off the court, slippery, the wind, etc, a bit of a chaotic week, a very tough week – I’m happy I was mentally able to handle it, and I’m really happy to win this great tournament, and that squash is back in Egypt.”