It took just six minutes for world number one Ramy Ashour to give up his bid to reclaim the world title when a hamstring injury caused the Egyptian to concede his second round match in the $327,500 Saudi PSA World Open Squash Championship, the richest PSA World Tour event of all-time at Sunset Beach Resort in the Saudi Arabian city of Al-Khobar.

“I’m very sad. I don’t know what to say. It means so much to me,” said the 23-year-old from Cairo, close to tears. “I felt it first in training back in Egypt a week ago. I was going to hospital every day, every day, and I hoped it would be all right when I got here. There was no way I was going to miss the World Open.”

Ashour was facing Aamir Atlas Khan, the No22 seed. After losing the first game 11-2 in six minutes, the second seed offered his hand to the Pakistani to signal the sad end to his 2010 World Open campaign.

“I really wanted to play and stay world number one,” added the 2008 champion. “But when I was here I felt it go again. I somehow managed to get through my first match (against Kristian Frost Olesen of Denmark) and I thought that with a rest day, if I prepared carefully, I might get through another one. 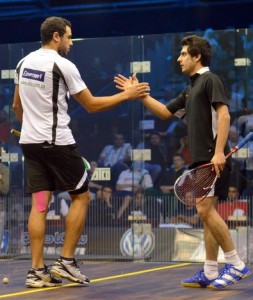 Khan, the world No23, becomes the first Pakistani to reach the event’s last 16 since 2002. The 20-year-old from Peshawar will now face Mohamed El Shorbagy, the Egyptian to whom he lost the World Junior Championship final in 2008.

Australian Stewart Boswell also claimed an unexpected place in the third round when 15th seed Adrian Grant conceded their match after 88 minutes. The left-hander from London was 2/1 up when he requested an injury timeout.

“It’s the same groin injury I got in the Commonwealths,” explained the Yorkshire-based 30-year-old afterwards. “I tweaked it in the third. I could probably play on with that, but I was having trouble swinging my left shoulder too, so it didn’t make any sense continuing. I might just have made things worse.” 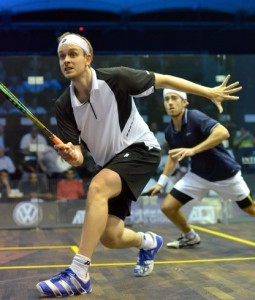 But three Englishmen did make it through to the last 16, with two meeting in the third round to guarantee English presence in the quarter-finals. Ninth seed Daryl Selby earned his third successive appearance at same stage with an 11-4, 11-7, 11-6 win over Finland’s Olli Tuominen, whilst England team-mate James Willstrop, the sixth seed, ended Borja Golan‘s run, beating the Spanish qualifier 11-6, 11-3, 11-3.

Willstrop and Golan have had numerous battles in the past: “We’ve been playing since junior days and there have been some tough matches, especially the last couple,” admitted the Yorkshireman after easing through the latest chapter to set up a meeting with Selby.

Golan is on a comeback trail after some 18 months out of the game recovering from knee surgery. “I’m in decent shape while he’s been off court for a long time,” said Willstrop. “And that probably made the difference tonight.

“I’d be happy to play again tomorrow, but it’s been a long hard season so I’m happy to take the rest days when they come. All the players owe a debt of gratitude to Ziad (Al-Turki) for how we’re being looked after here – we’re all hoping we can put on a tournament worthy of it all.”

Selby was pleased with his win: “Olli’s one of the hardest guys to play, he puts in 100% every single time and you have to be mentally prepared to play him.

“That’s two good matches I’ve played now, and with a rest day, and the facilities and relaxing atmosphere Ziad’s given us the best possible chance of playing well – and you can see that the top players are responding, they’re all playing well.”