World Squash Federation President N Ramachandran has been re-elected by acclaim for a further four-year term at the 42nd WSF AGM today in Stockholm, Sweden.

Ramachandran, from Chennai in India, declared himself honoured to have been given the opportunity of have a further period of presidency.

“I have dedicated myself to leading the squash quest to achieve our dream of a place on the programme of the Olympic Games, and will continue to do so,” said Ramachandran, who succeeded squash legend Jahangir Khan in October 2008.

“Our sport has a great deal to offer and the chance for me to continue pressing our case is a task I will throw myself into fully.”

WSF Vice-President Chris Stahl (Malta), who had not stood for re-election, was recognised by President Ramachandran for his many years of dedicated service to squash generally and the WSF specifically.

The AGM followed the two-day AGM Conference which featured a variety of presentations for representatives of 40 nations as well as a large number of observers. The presentations included case studies of the growth in squash in Poland; marketing initiatives from other sports; a stakeholder survey from New Zealand; the Swiss National Development Plan marketing planning; and an Olympic bid update given by Mike Lee of Vero Communications, the WSF bid consultants.

The conference followed the inaugural WSF Development Conference which featured presentations on schemes used by tennis, badminton and table tennis – alongside initiatives from the squash world such as the Colombian Schools Programme; the Egyptian junior selection system; development tools; dealing with introducing and transitioning players; and a series of workshops. 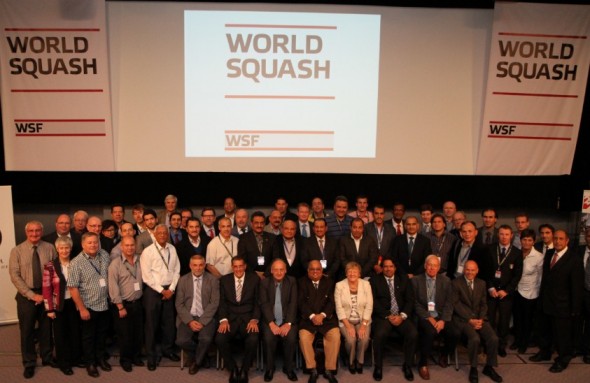