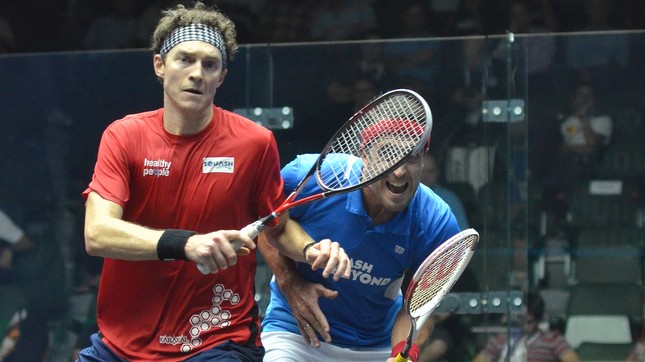 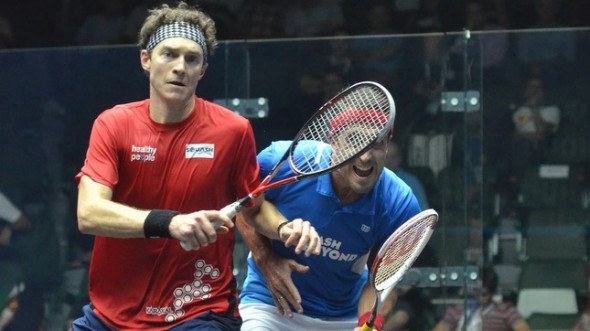 Australian Cameron Pilley, the World No.20, powered his way past English World No.8 Peter Barker in a brutal 86-minute encounter to move into the third round of the 2014 Qatar PSA World Championship in Doha.
The rangy man from Yamba struggled to overcome another Englishman, Joe Lee, in the first round but he stepped up through the gears against Barker, one of the tour’s most resilient players, to earn an impressive victory against the number seven seed, surviving a strong fightback to hold on for victory. 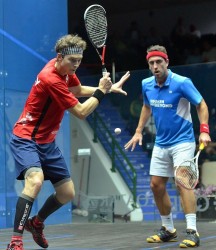 Pilley looked in control of the contest after racing out to a two-game lead but Barker fought back and took advantage of a string of errors to level the match and force a decider, but it was the Australian who prevailed in a tough physical match-up, winning 2-10, 11-6, 9-11, 6-11, 11-5
“I’m very happy with that win,” said Pilley. “We’ve played a few times in the last six months and he’s won every time so it’s pleasing to make up for those today.
“In the fifth game I just wanted to get off to a good start and not mess it up and I played as well as I could ever have hoped to.
“I had a bit of a motivation drop after the Commonwealth Games but I had a great training stint with David Palmer recently and that gave me a bit of a new lease of live.
“I struggled in the first round so I’m more than happy to get that win today.” 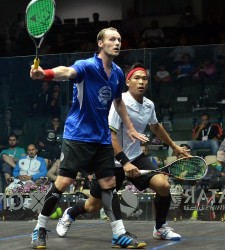 Earlier in the day Gregory Gaultier, the French number one seed, responded to his critics with a resounding victory over Malaysian Mohd Nafiizwan Adnan.
Gaultier almost crashed out of the tournament at the first hurdle, having to come from two-games down to claw his way past Egyptian Andrew Shoukry, but he rebounded in emphatic fashion to annihilate Adnan 11-4, 11-7, 11-3 in just 31-minutes.
It’s a victory that sees the man from Aix-En-Provence move into the third round to face Egyptian Omar Mosaad in what will be his 50th World Championship contest since making his debut in the tournament in 2002, when he beat Del Harris in the first round.
“I’m feeling better and I feel like things are starting to come together more now,” said Gaultier. 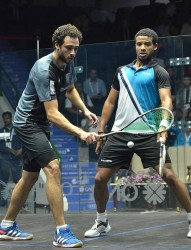 “Physically I hadn’t felt good since I arrived here in Doha but I’m felling much better now and I’m looking forward to the next match now.
“I have been playing and training had for two weeks building up to this tournament and winning is all I care about.”
Gaultier’s seeded semi-final opponent, two-time World Champions Ramy Ashour, continued his his injury-comeback with a resounding 3-0 victory over England’s Adrian Grant.
Elsewhere Egyptians Omar Mosaad and Fares Dessouki successfully moved into the third round, getting past compatriots Karim Ali Fathi and Marwan Elshorbagy, respectively, while Miguel Rodriguez, Alister Walker and Borja Golan rounded out the top half of the second round with wins.