The event, boasting a $120,000 prize-fund, will get underway on 17 March at the Nicol David International Squash Centre – with the later rounds staged on an all-glass showcourt at the 10,000-seater Penang International Sports Arena.

It will be the third time in the 35-year history of this World Squash Federation (WSF) title that the WSA’s premier event has been staged in Malaysia – but the first time in Penang, the home of defending champion Nicol David, the world number one.

David, the Malaysian sporting icon who this month celebrated an historic 90th successive month at the top of the world rankings, will have the perfect setting to extend her record to eight world titles since 2005.

Penang, which hosted the Women’s World Junior Championships in 2001, has a great tradition of developing squash talent. Not only is the island David’s birthplace, but also that of women’s world No6 Low Wee Wern and men’s star Ong Beng Hee.

“This support by them taking a huge role in hosting the 2013 World Championship is truly amazing. I’m looking forward to sharing my hometown with the top WSA players from all over the world. Glad to know that we players are given a chance to compete for the 2013 World title in Penang!”

WSA Chairman Ingrid Lofdahl-Bentzer added: “It is fantastic news for the WSA to be able announce this event. We very grateful to Penang and everyone involved for their dedication and continued support. I have no doubt that the players share my excitement and will be looking forward to a fantastic World Championship.”

At today’s press conference in the Malaysian capital Kuala Lumpur, Penang Chief Minister Lim Guan Eng said: “WSA’s agreement to permit Penang to host this event is recognition that Penang has the facilities, amenities and infrastructure of a fitting location for a world class event as well as the experience and expertise to organise a world championship. 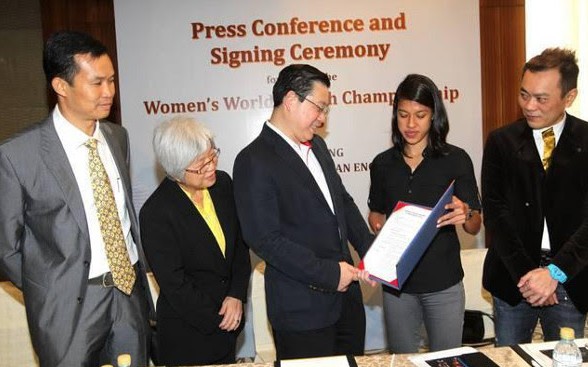 “The Penang state government felt it was a real shame that Penang’s very own world squash queen will not be able to add to her already impressive collection of seven world titles earned in 2005, 2006, 2008-2012,” continued the Minister.

“Malaysians, especially Penangites, are eagerly awaiting her to defend her title for a record eighth time.”

The 2014 Women’s World Championship will take place later in the year – full details of which are expected to be announced in due course.