Australian David Palmer, the tenth seed, overcame a slow start to beat India’s Saurav Ghosal in four games in today’s (Tuesday) first round of the $142,500 Viridian Australian Open, the fourth PSA Super Series squash event of the year, in Canberra.

Ghosal, the unseeded world No26 celebrating his 24th birthday, came out of the blocks firing to open a 9-2 lead in the first game and although Palmer recovered he couldn’t save the first game, the Indian number one taking it 12-10.

The win takes former world number one Palmer into a second round clash with arch-rival James Willstrop of England.

“I felt okay physically throughout the match but I struggled to get any rhythm,” Palmer said. “A slow start wasn’t ideal and he got away and got on a bit of a roll and he was tough to pull back.

“Eventually my game started to take a little bit of effect on him midway through the second, but it still wasn’t easy.

“I thought at stages he was tired and would drop off a bit but he kept pushing and surprised me a little bit.”

“Any round of 16 match will be tough, but David and I have had some great matches in big tournaments over the years,” said the 26-year-old Yorkshireman. 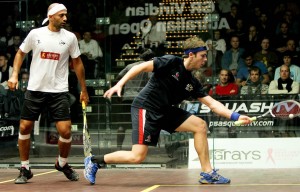 Former world number one Amr Shabana of Egypt saw off promising Australian Ryan Cuskelly in four games in the first match of the evening session.

“It was a good game – he’s a young player coming up and he gave me a run for my money for sure,” a relieved Shabana said.

Cuskelly said he was getting closer to the top 10 players and a breakthrough win was not far away.

“He’s just so experienced – one of the first two games I thought I could have got,” Cuskelly said.

“In the first I just made a couple of errors. If I had got that game it could have been a little bit different but I thought I played pretty good.

“It’s just so hard because he hits the ball so accurately and makes you do a lot of work.”

The New York-based 23-year-old said he fought as hard as he could to win the third game but then suffered some cramps in the fourth and couldn’t match Shabana. 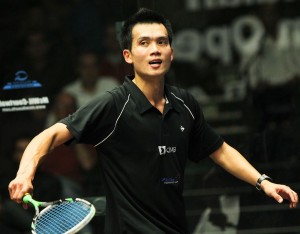 Ong took the opening two games against a sluggish Walker, who then found his touch and struck back to level the match.

The decider was a see-sawing battle in which first one player, then the other had the advantage.

“It was his first match of the season, whereas I had the Malaysian Open two weeks ago so I think he had a very bad start,” the Malaysian said. “I played very well but it was a slow start for him.

“As soon as he got going he put me under a lot of pressure in the third and fourth and in the fifth at the end, I was very lucky he made two mistakes at 11-all.

“There was nothing in it, I just think today was my day.”