For the second successive year, the World Open was to be decided by a Malaysia versus England finale, this time featuring world No.3 Laura Massaro.

David had dispatched last year’s finalist Jenny Duncalf in straight games in the semi-finals, as well as 2010 finalist Omneya Abdel Kawy in round one.  Further defeats of Annie Au in round two and a four game win over Madeline Perry ensured that the Malaysian was able to defend her six World Open titles. 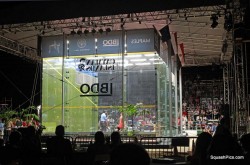 By contrast, Massaro experienced over three hours of court-time on her way to the final, including a dramatic five-game thriller against second seed Raneem El Weleily in the semi-final, and a 51-minute effort to dispatch local hero and qualifier Nicolette Fernandes in round two. 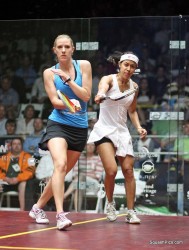 David has been on the receiving end of an upset from Massaro, losing to the Englishwoman in both the Singapore Masters and the Cleveland Classic in 2011, but the world No.1 has avenged these losses with six wins over Massaro in WSA events in 2012.

The second game was much closer, with the Englishwoman matching David’s line and length game plan, whilst causing some problems for her opponent.  The Malaysian’s response to a challenge is to simply up the pace and she did just that. She weathered the storm created by Massaro’s pressure, before coming through the business end of a pivotal second game to extend her lead. 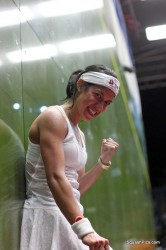 David refused to falter in her dominance, and the experience of six previous World Open finals weighed heavily to her advantage.  She ran out another early lead in the third game, and a dejected Massaro settled into the game too late to do any serious damage to her opponents 5-point lead.

A stroke and a tin gave the 29-year-old from Penang championship-point and she leapt on a loose Massaro shot to drive home her seventh World Open title.

“I can’t believe it,” exclaimed a delighted David. “I’m so pleased with my game tonight.  Laura played so well and was pushing me on every point, I just couldn’t relax at any time, she played a brilliant match today.

“I was focused, but I had to step up another gear to win today.  I just wanted to win so much.  To win again in Cayman and that seventh world title… I wanted it all! 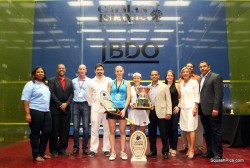 “It’s been a great experience here again, I’ll try to see a bit of the island tomorrow before I leave!  Thanks to Dan [Kneipp, Promoter], the sponsors and organisers, and the fantastic Cayman crowd, we feed off their energy, and they all do it better than anywhere else we go.” 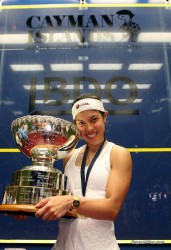 Normally a successful WSA World Tour Gold event in spring-time, Grand Cayman this year hosted the $165,000 World Open event that has previously been held in Rotterdam, Sharm El Sheikh, Amsterdam and Manchester.
2012 has been a near perfect season for David, finishing just one event shy of a World Series clean-sweep after losing out to Raneem El Weleily on home soil in the Malaysian Open in September.
The Malaysian also lost out in the Carol Weymuller Open in New York later that month, but returned in emphatic style to claim the elusive US Open in Philadelphia.  Claiming not only the one World Series title that had eluded her, it was also David’s 63rd WSA World Tour title, which moved her above the record held by Sarah Fitz-Gerald of 62.
David finishes 2012 with an incredible 65 WSA titles to her name, with eight of them coming in the last 12 months.