The first Women’s World Open ever to be held in Egypt, the leading event on the WISPA World Tour will feature a record prize fund of $147,000. 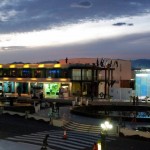 The tournament will be staged on an all-glass show court at Soho Square Sharm El Sheikh, part of the premier resort in Sharm El Sheikh’s shopping and entertainment complex.  Following the successful Soho Square WISPA Tour event held in 2009, the high-end destination resort built permanent squash courts, on which the three rounds of qualification will be played.

It was in December 2005, three years after Sarah Fitz-Gerald made history with her fifth world title in Qatar, that Nicol David began the assault on her mentor’s record.  The 26-year-old from Penang clinched her fourth world title in five years last September, beating Dutch rival Natalie Grinham in the final in her hometown of Amsterdam.

David, who has dominated the women’s game since first topping the world rankings in January 2006, has already overtaken one of Fitz-Gerald’s achievements – surpassing her regular Australian training partner to become the player with the third longest reign at the top of the women’s rankings.

Nicol David begins her 2010 world title campaign against a qualifier – and is scheduled to face Jenny Duncalf, the second seed from England, in the final. 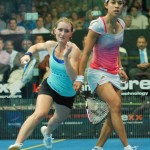 But the Malaysian could come up against Natalie Grinham in the quarter-finals in a repeat of the 2009 final.  Grinham, the No8 seed, is making her Tour comeback after giving birth to her first child, son Kieran, in May.

Duncalf faces rising Hong Kong star Annie Au in the first round and is likely to go on to meet fifth seed Omneya Abdel Kawy in the quarter-finals.  The 25-year-old Egyptian has long been a thorn in Duncalf’s side – and boasts an 8-2 head-to-head Tour record over the Englishwoman. 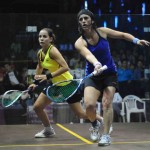 If Duncalf does progress to the semi-finals, her anticipated opponent would be Rachael Grinham, the third seed from Australia who is one of two former world champions in the draw.  The 33-year-old Queenslander won the title in 2007 after beating younger sister Natalie in the final in Madrid.

But Grinham senior also has a tough potential quarter-final clash – with Ireland’s Madeline Perry, the sixth seed who celebrated the biggest tournament win of her career at the Australian Open in Canberra on Sunday.

Former world number one Natalie Grainger will be returning to World Open action after missing the 2009 event because of a foot injury.  The No7 seed from the USA made her debut in the 1993 event in her then home country South Africa.  Runner-up in 2002, Grainger will face England’s Sarah Kippax in the opening round in Egypt.

Dutch star Vanessa Atkinson will be making her 14th successive appearance in the championship. The 2004 champion is the 15th seed, and faces a qualifier in the first round.