Malaysia’s world number one Nicol David established yet another milestone in her sensational squash career when she beat England’s Jenny Duncalf, the world No2, in the final of the $74,000 Women’s Cathay Pacific Sun Hung Kai Financial Hong Kong Open to secure her sixth successive title triumph in the established WISPA World Tour event, the seventh WISPA Gold championship of the year.

The 27-year-old from Penang, whose last Tour defeat was to Duncalf in 2009, extended her 2010 winning run over her closest rival with an 11-6, 12-10, 12-10 victory in 40 minutes on the all-glass court erected in the Plaza Hollywoodshopping centre in Kowloon. 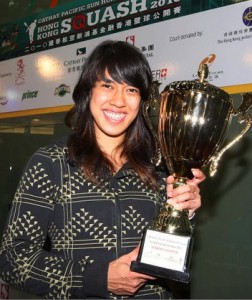 “I knew that Jenny would come out fighting,” the delighted winner told www.squashsite.co.uk afterwards. “All the other girls raise their game against me, so I know I have to raise mine!

“I had to keep my focus, keep on playing my game whatever. Even at 10-7 down I knew it wasn’t over, that if I kept going she might make an error or two, and that’s what happened.

“As the tournament went on my game got stronger and stronger. Being here on the glass court always inspires me, and since I won my first world title here in Hong Kong I always want to do well here.

“It’s so great to win here again, especially with the worlds coming up so soon,” David concluded.

The win extends David’s unbeaten run to 25 Tour matches this year – and boosts her career Tour tally to 47 titles, including six this year!