Malaysian squash star Nicol David reached another significant milestone in her illustrious career when she beat AustralianRachael Grinham in the final of the $74,000 Women’s Qatar Classic to net her 50th WISPA World Tour title at theKhalifa International Tennis & Squash Complex in Doha.

The top-seeded world number one overcame the disappointment of losing at the semi-final stage last year by beating unseeded Egyptian Nour El Tayeb to reach the 2010 final.

And the climax against career-long rival Rachael Grinham, the fourth seed and a former world champion, marked the pair’s 32nd Tour clash since the first in April 2000 in Malaysia. 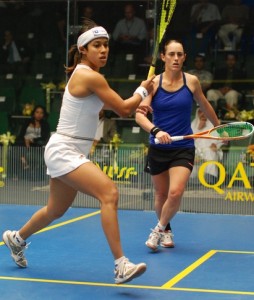 “Rachael and I know each other’s games so well, you’re always going to get close matches and long rallies,” explained the new champion after extending her head-to-head record to 26-6.

“You try not to think about past matches, head to head records – but the one you lost always comes to your mind and you know it’s not going to be easy.

“It was great that the crowd got involved, I get so much support here it really helps, so thanks to the supporters, the organisers and the sponsors for another great tournament, it’s so good to keep coming back here year after year.

“It’s good to finish the WISPA season on a winning note. Now it’s back to Malaysia for a few days and then join up with the rest of the team for the Asian Games.”

Grinham rued missed opportunities in the third game: “I maybe wasn’t as patient as I needed to be today, especially when I was up in the third, I tried to finish it too quickly I think.

“I wasn’t as accurate as I’d like either, I sprayed a few balls around and missed a few basic straight shots, it could be about a bit of stiffness and not being as properly stable on the shot, but that’s something everyone has to deal with,” added the 33-year-old Queenslander.

“Not too bad overall, but I could have done with snatching that third.”