The 26-year-old from Penang first hit the top spot in January 2006 – then began her current uninterrupted reign as world number one from August in the same year. 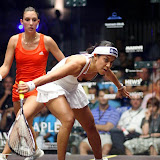 With 44 WISPA Tour titles to her credit, Nicol David now boasts the longest run at the top of the world rankings since New Zealander Susan Devoy dominated the women’s game from the mid 80s to the early 90s.

England’s Jenny Duncalf is at two in the new list – ahead of Grinham sisters Rachael, who rises to three, and Natalie, who slips to four.

But two southern hemisphere players have much to celebrate in the June rankings: Australia’s Donna Urquhart jumps three places to a career-high No16 to consolidate her status as her country’s third highest-ranked player.

The 23-year-old left-hander from New South Wales has won four Tour titles and reached her ninth final at the Chairman’s Cup in Hong Kong in January.

And Joelle King doubles New Zealand interest in the top 20 by making her debut in the elite group. The 21-year-old from Cambridge has exceeded expectations in all four WISPA Tour events in which she has competed this year – and, unseeded, secured her fifth title at the Texas Open in the USA in April after beating top seed Rachael Grinham in the final!