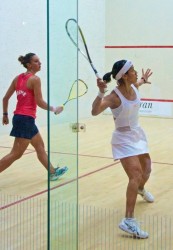 The match notched up David’s ninth successive Tour win over the world No10 from Creteil – but Serme had enjoyed a sensational run in only her third appearance in the event, upsetting higher-ranked English opponents Alison Waters,Jenny Duncalf and defending champion Laura Massaro in quick succession.

“The match started off evenly and both players were working the court well and there were some long hard fought rallies,” explained Heights Casino Director of Squash Linda Elriani. “Nicol looked as though she was prepared to just absorb Camille’s pressure and not go for too many shots.

“Camille was trying to apply the pressure that she had done yesterday and throughout the week but was making some tentative errors with her short game. Nicol managed to edge ahead to 9-7 after a crazy long rally that ended in backhand drop in the tin from Camille. 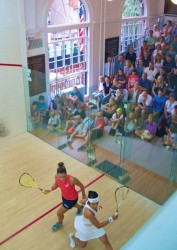 “Another tin from Camille took Nicol to game ball at 10-8. Camille gave a big push and managed to pull back and with a backhand boast in the tin from Nicol and a lovely backhand drop winner from Camille this took her to 10-10. Nicol stepped on the gas and a very deep penetrating drive forced an error from Camille and then an unforced backhand volley drop gave Nicol the first game 12-10.”

David dominated the second, dropping just two points to establish a 2/0 lead – and stayed focussed in the third, fittingly winning the championship point on a perfect crosscourt drop shot straight into the nick! 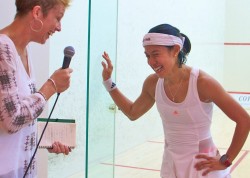 “I’m just so happy to win this tournament after so long,” said David after the 12-10, 11-2, 11-5 triumph which saw the 30-year-old from Penang go through the championship without dropping a game.

“It has been such a great atmosphere that it just drives me forward to play better squash each day. Camille played really well in that first game and it was neck and neck all the way!

“In the second and third I mixed it up a bit more because she gets into a great rhythm and it can be dangerous!

“I’m very pleased and I’m looking forward to next week. I’d like to thank Linda for such a great event and all the families that have supported this tournament for all these years.” 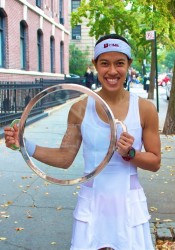 Serme rued the errors in her final match: “I’m a bit disappointed to be honest,” said the 24-year-old France and European champion. “Even though she’s the world number one I wanted to do better than getting one game as that’s the best I have done against her!

“I felt she played really well and I made too many mistakes. I don’t even know why as I wasn’t even trying to go fine on my shots. Right after the match I feel disappointed but later I will look back at what a great tournament I’ve had.

“The good thing is I only have to wait one week to hopefully play her again at the US Open. Thanks so much to everyone here for everything! Thanks too for all the support here and back home and all the people that watched me on the live streaming.”

David’s success marks her the third WSA title of the year – and the 68th of her career. 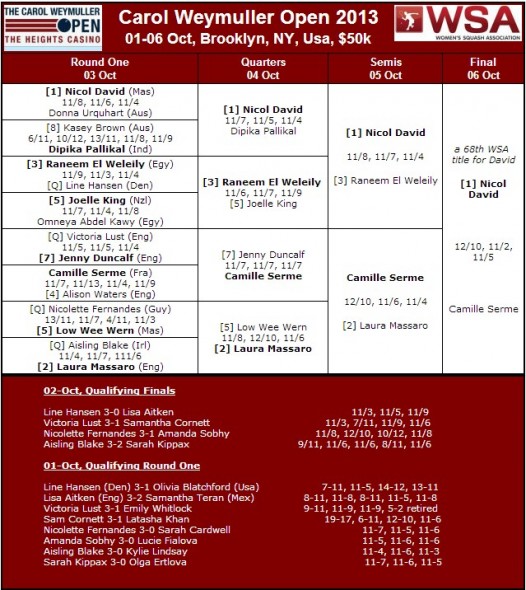