David saved six game points in the crucial opening game then overwhelmed the Englishwoman in the next two to win 17-15, 11-2, 11-6 for her 62nd title on the women’s tour.

Playing in front of legendary champion Heather McKay and with squash greats Vicki Cardwell and Michelle Martin also looking on, David showed why she is considered the greatest player of the past decade as she absorbed everything the Englishwoman threw at her before turning the screws on her opponent.

Massaro played almost perfect squash in the first game, slowing the pace down and keeping David pinned to the back of the court.

She moved to 10-8 but couldn’t convert, then had four more chances in the tiebreak, all of which David saved.

David eventually took the first game on her second opportunity then came out firing as Massaro went away from the game plan that had served her so well in the first.

The Malaysian dominated the front of the court and volleyed superbly to race to a 10-0 lead before closing it out.

Massaro regrouped in the third and again slowed the pace, but at 4-4 David won four points in a row to put herself in an unbeatable position.

“It was hard to get Laura off my back, I had to really get stuck in there, it was mentally and physically tough,” she said of the first game.

“In the second I started to get in front and was able to start serving and gaining control. I just knew I wasn’t letting that first game go, it was close, I’m just so glad to win it three-love.”

Massaro said she hadn’t done anything wrong in the first game: “I just think I was a bit unlucky at the end of the rallies, I’d done everything really well the whole game trying to keep her at the back,” she said.

“I just went a bit crazy trying to finish the rally too soon on those game points. I was trying to think it was just one game when I went back on but obviously the way the second turned out it affected me a little bit more than I thought.

“It was probably a little bit more crucial than I thought at the time.”

Ashour took 53 minutes to see off the tall and powerful Mosaad 11-9, 11-9, 11-6, thrilling the big crowd in Canberra’s Royal Theatre with the audacity of his stroke play.

Mosaad was also in superb touch but Ashour always had the edge over his countryman, sneaking the first two games then stamping his authority on the third, clinching victory with a devastating drive down the forehand wall. 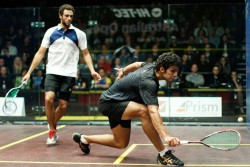 Ashour had to survive two gruelling matches to make the final, first downing Nicolas Mueller in five games in the quarter-finals then Cameron Pilley in four in the semis.

But there were no signs of weariness in the final, the 24-year-old choosing to keep hitting the ball during the game breaks rather than having a rest.

He said he found it difficult playing against Mosaad, someone he grew up with in Egypt.

‘We both know each other’s games very well, we’ve both seen each other’s shots so we’re at the place where the ball is going even before it’s been hit,” Ashour said.

“It’s more of a mental match as a matter of fact. If you’re not 100 per cent accurate, the other person is going to string a lot of points together in a row, especially if you’re playing who knows your game.” 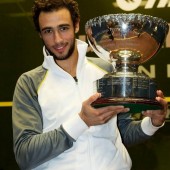 Ashour said he had been pushed hard throughout the tournament: “Every match was tough this week, the further you go in the tournament the more pressure is on you, the more you are worried and the more you don’t want to let go of what you have done.”

The Egyptian has made no secret of his wish to return to world number one and also used his win to push the cause to have squash included in the Olympics.

“It’s very healthy, you burn a lot of calories. This game can be very, very good for human beings in general – not just as a sport,” he said. “We have a portable court that can be put anywhere in the world. It’s very fast, very interesting, very exciting and everyone whoever watches squash always comes back.” 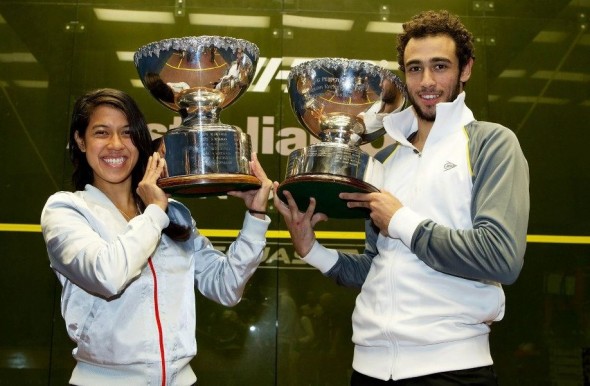 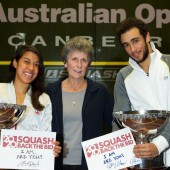 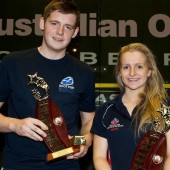 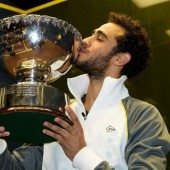 The champions with Heather McKay, and U21 winners Greg Lobban and Sarah Cardwell