Nick Matthew overcame a tired fellow countryman James Willstrop in the final of the $327,500 Saudi PSA World Open Squash Championship in Saudi Arabia to become the first English World Open champion in the 34-year history of the sport’s premier event.

The climax of the richest PSA World Tour championship of all-time, at Sunset Beach Resort in the Saudi Arabian city ofAl-Khobar, was a repeat of October’s Commonwealth Games final in Delhi – and extends Matthew’s unbeaten Tour run over his England team-mate and fellow Yorkshireman to nine matches since December 2007. 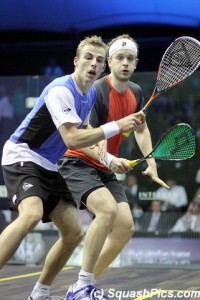 Matthew, the top seed from Sheffield, reached the final after dethroning title-holder Amr Shabana, the former world number one from Egypt who was in line to win the title for a fifth time.

But Willstrop arguably had a more brutal route to the final, fighting off marathon challenges from two further England team-mates Daryl Selby and Peter Barker in the third round and semi-finals, respectively.

The 27-year-old sixth seed from Leeds started the more impressively, surging ahead from seven-all to take a well-deserved first game lead after 21 minutes – causing Matthew to concede his first game of the tournament.

“I only thought about winning the title in the last few rallies, you are only human,” said Matthew after the stellar performance which adds world champion to the world number one and Commonwealth Games gold medallist successes the 30-year-old has achieved this year.

“At that stage you are playing against yourself instead of your opponent. You are sort of fighting the demons in your head. You see the finish line and as it comes closer in terms of score it gets further away because you are drifting in your thoughts.

“With every single thought I tried to tell myself ‘next rally, next rally’.

“I didn’t play badly in the first game but James was just immaculate,” continued the beaming new champion. “He was unlucky that he had had those hard matches which took it out of him.”

Matthew’s success comes after career-threatening shoulder surgery in 2008 which kept him away from the Tour for nine months. 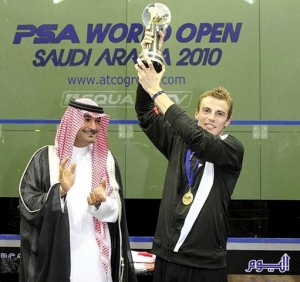 “I never in my wildest dreams thought that all this would happen to me. As for that shoulder injury, it taught me to keep things in perspective – not to get too low on the low points, and not to get carried away either with the high if I am in a big final.”

The triumph is expected to take Matthew back to the top of the PSA world rankings in January – replacing Ramy Ashour, the Egyptian who was forced to bow out in the second round with a hamstring injury.

But the Englishman will have to maintain his form in next week’s Pun Lloyd PSA Masters, the tenth and final 2010 PSA Super Series event in Delhi where he and Willstrop are also expected to contest the final.