While Nick Matthew and Nicol David were honoured as Players of the Year at the annual World Squash Awards, it was local legends Frank Stella and Mark Talbott who stole the show at the dinner which attracted more than 150 leading figures from the squash world in the stunning Vanderbilt Hall at Grand Central Terminal in New York.

The sixth year of the prestigious awards event was the first to be staged outside of the UK since being inaugurated by founders Eventis Sports Marketing and highlights the growing popularity of the global sport.

Nick Matthew had an outstanding year, winning the World Open, two Commonwealth Gold medals, and finishing the year as world No1.  The Englishman received the PSA Player of the Year award, for the first time, from the PSA CEO Alex Gough. 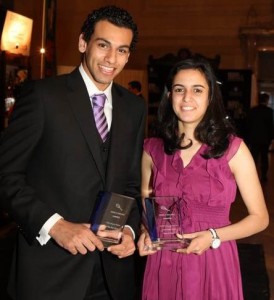 If the men’s award was clear cut then there can never have been any doubt that Nicol David, the Malaysian – unbeaten in the whole of 2010 – would collect the WISPA Player of the Year award for the sixth year in a row!

Unable to attend the ceremony, David sent a message via Tim Garner, WISPA Tour Director, from her training base in Australia – which included thanks to her fellow WISPA members for voting for her, and a comment that will send a chill through her rivals:  She is deep in training so that she would be ‘a little better’ next year!

Egyptian Mohamed El Shorbagy received the PSA Young Player of the Year award for a second year running from PSA Chief Operating Officer Lee Beachill.  The 19-year-old from Alexandria rose in to the world’s top 10 with numerous impressive performances on the PSA World Tour.

Nour El Tayeb, also from Egypt, won the WISPA Young Player of the Year award, receiving her plaque from WISPA President Natalie Grainger.  The Egyptian 17-year-old had flown all the way from Cairo with her parents to accept the award, and was delighted to be there.

The award for the WISPA Most Improved Player of the Year – presented by WISPA Board member Suzie Pierrepont – went to Kasey Brown, the 25-year-old from Australia who had earlier in the evening won her first round match in the Harrow Greenwich Open. 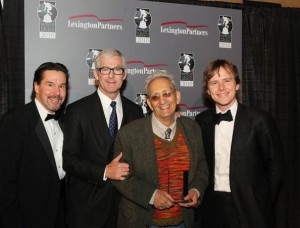 Another first was the presence of the ISDA who oversee the US Hardball doubles tour.  They recognised the achievements of their members, with Greg Park collecting ISDA Rookie of the Year, and Damien Mudge & Viktor Berg winning ISDA Team of the Year.

A special Services to Squash award was made to artist Frank Stella, who is widely recognised as having brought the two codes of squash in the USA, softball & hardball, together.  Former PSA Board member Clive Caldwell presented Stella with the award, who was greeted with a standing ovation. 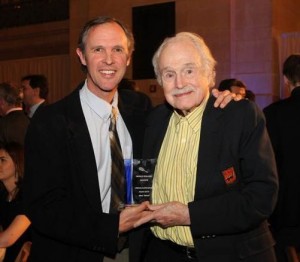 The second standing ovation rounded off the evening when Ned Edwards presented American icon Mark Talbott with theLifetime Achievement Award.  Widely considered to be the first player to be able to switch between hardball and traditional squash, Talbott fought out many battles in the 80s with the legendary Jahangir Khan, who was looking to dominate both codes.

Earlier in the evening US International Natalie Grainger was recognised for a glittering professional career that spanned 14 years, including a stay at world No1.

The evening was hosted by Eventis’ Peter Nicol and John Nimick, who will now turn his attention to the JP Morgan Tournament of Champions, taking place in the same Grand Central Terminal this week.

“It is especially fitting that Mark and Frank were honoured as each of them played a significant role in the sport’s explosion in popularity here in the US in the 1980s,” said Nimick

Kasey Brown – WISPA 2010 Most Improved Player of the Year