The June Dunlop PSA Men’s World Squash Rankings, published today  by the Professional Squash Association, confirm that Nick Matthew is the new world number one for the first time.

The 29-year-old from Sheffield becomes the 16th man to top the list since the world rankings were first introduced in the mid-70s – and the first Englishman since Lee Beachill was world number one in December 2004, which followed fellow countryman Peter Nicol‘s 60-month run between 1998 and 2004.

Matthew clinched the sport’s premier position after winning last month’s Sky Open, the third PSA Super Series event of the year in Egypt. The triumph marked his fourth Tour title of the year – and moved the British National champion ahead of rival Ramy Ashour, the Egyptian who had topped the rankings since January. Favourite Ashour suffered a surprise semi-final defeat in front of his home crowd in Cairo.

“Becoming world number one is every sports person’s dream and it’s something I’ve worked towards all of my squash life since I turned professional in 1998,” said Matthew on hearing the confirmation of his achievement. “The enormity of it certainly hasn’t sunk in yet (there’s something about being a squash player that keeps your feet firmly on the ground!) and at the time it certainly came out of the blue, as I had prepared myself to have to beat Ramy in front of all his fans in the final if I were to achieve my goal! 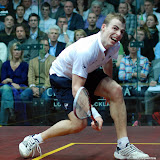 “Squash missing out on London 2012, and Rio 2016 for that matter, was a massive blow and hopefully this will give the sport of squash a much-needed boost in this country. England squash is currently enjoying its most successful period ever and hopefully, as a group, we can inspire the next generation of players.

“With the season being over now, it’s a great time to have achieved this,” Matthew added. “It means I can put my feet up for a few weeks and then come back refreshed and ready for the new challenge of holding on to the top spot. When I come back I will be reassessing my goals – and becoming World Champion and winning Commonwealth gold will be very high on the agenda.”

Alex Gough, the former world No5 who is now the PSA CEO, added: “There is no one out there at the minute that deserves this more than Nick. Over the last three or four years he has had more setbacks than anyone – but he has never once complained.

“Instead, fearlessly and relentlessly, he has come back time after time with this as the main goal in mind. It will have meant everything for him to reach world number one and he will not want to let this feeling go. The other guys on the Tour are going to have to double efforts to get it back from him.

“Squash is in a fantastic place at the moment, as any one of five or six players can win one of the major events – and this is leading to very high quality matches and tournaments. The second half the year starts again in Canberra, Australia for theAustralian Open in August – and all eyes will be on Nick Matthew to see how he handles the extra pressure.”