England’s Nick Matthew brought his 2010 Commonwealth Games Squash campaign to a magnificent climax in Delhi tonight when, with Adrian Grant, he won gold in the Men’s Doubles to add to the gold medal he won in last week’s singles final at the Siri Fort Sports Complex.

In the final match on the spectacular all-glass showcourt, the favourites battled for more than two hours to hold off an Australian challenge from second seeds Stewart Boswell & David Palmer – and recovered from losing the second game to win 11-9, 6-11, 11-5 in 133 minutes.

The success means that the Men’s Doubles gold medal stays in England hands for the fourth time since the sport’s maiden appearance in the Games in 1998.

“Four years ago, a legendary English squash player Peter Nicol got two golds – and I delighted to have been able to emulate him,” said the jubilant 30-year-old from Sheffield immediately afterwards.

“Winning two gold medals is an amazing feeling – and doubles is so different from singles squash. It’s all about camaraderie with your partner. You almost feel that the racket isn’t attached to your arm – you are just doing it for your partner.

“And when we got our heads back together after the second game, we were amazing.

“It’s definitely the biggest moment of my career,” added the world No2. “I didn’t get the chance to celebrate my singles success, but now I will be able to as I made a good decision not to play a major Tour event in Egypt later this week. I put aside thoughts of regaining my world number one ranking for the sake of two gold medals.”

In describing their marathon encounter – their third three-game win over the top Australian pair since March – Matthew admitted: “We always have a tough battle with them. David was chasing that elusive gold medal

“But it’s all about team work – and Adrian and I have known each other since we were nine years old – and that’s what made it work. I think it got a bit scrappy in the second, but we let our squash do the talking in the third.”

Grant, the London-born world No14 who is based in Leeds, said: “After Nick had done such a fantastic job in the singles, I had to give him the motivation to push harder in the doubles. In doubles, you’ve got to take world rankings out of it – you’ve got to understand each others’ games. We never took anybody for granted.”

The outcome provided Stewart Boswell with his third successive silver medal in the event. It also gave David Palmer, the former world number one and two-time world champion, a record-equalling sixth Commonwealth Games medal since 1998.

“It’s definitely nice – but you’ve got to put it into perspective. Tonight’s wasn’t the colour I wanted. It was a tough schedule – and, looking back, perhaps I should have pulled out of one,” said the 34-year-old from Lithgow, NSW, after his farewell appearance in the event.

Duncalf and Massaro, who reached the gold medal play-off after upsetting top-seeded Australians Kasey Brown & Donna Urquhart in the semi-finals, led in the first game and had game-balls from 10-6 in the second.

But the Kiwis kept up the pressure before leaping for joy after their surprise gold medal triumph.

“We are OVER the moon,” said a beaming Hawkes, the world No14 from Auckland. “Not in my wildest dreams did I expect to do this – I am so happy to have won gold.

“It’s the first time we’ve played together,” continued the 27-year-old. “It’s great to get New Zealand’s fourth gold in the Games.”

Just before rushing back to the court to prepare for the next match – her Mixed Doubles final which followed immediately –Joelle King paid compliments to Hawkes: “My partner here was pretty awesome.

“When I was a little girl, I dreamed about winning a Commonwealth Games medal,” added the 22-year-old from Cambridge.

Duncalf was inevitably despondent: “We had the confidence to win gold. There’s a very fine line in doubles between winning and losing – they did really well to come back.”

Massaro added: We weren’t expecting to be paired up, and have had very little practice together, but I thought we did well.

“But it’s horrible to lose your final match – but I’m sure we’ll celebrate silver later,” suggested the 26-year-old world No7.

It was a first squash gold medal of the 2010 Games for Australia when favourites Kasey Brown & Cameron Pilley saw off New Zealand outsiders Joelle King & Martin Knight, the 11th seeds, 8-11, 11-7, 11-5 in a 96-minute Mixed Doublesfinal.

Clearly uplifted by her gold medal performance some 20 minutes earlier, King led the Kiwis to a first game lead before the top seeds turned up the power to storm to gold.

Is it a relief, the winning Aussies were asked by a home reporter? “No, it’s not a relief,” said Brown. “Yes, it is,” interjected Pilley. “It’s a relief to finish doubles!

“We both played two matches today we didn’t lose,” added Pilley, the world No16 from Yamba, New South Wales. “Gold again in 2014 in Scotland? That’s definitely the goal!”

When asked how it felt to win his county’s first squash gold medal this time, the tall 27-year-old responded: “It’s special – but more so because you’re playing for all of squash in Australia. It’s an honour to put on the Australian colours – it gives you something extra, and I think that showed when we came back from one-nil down.”

Both players agreed that a beer was one of their priorities.

“Gold means everything – it’s incredible,” said Brown. “To get gold for your country is pretty amazing.” 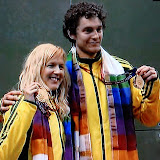 After winning bronze in the singles event, and bronze earlier in the day in the Women’s Doubles, Brown became the only player to win three medals in Delhi.

“Winning three medals is a fantastic feeling – a gold medal means so much, especially representing Australia,” added the world No8 from Taree, NSW.

“This year I’ve been working really hard and I feel I’ve really improved. I was confident I could do well.

“But the first thing I need to do is ring my Mum!”

A downbeat Martin Knight conceded that the best pair won: “Today, they just played better,” said the Wellington-born 26-year-old. “I set goals every day and today we were going for gold – and there’s no reason why we could have expected that. But I will go away with good memories.”