While hosts France suffered double disappointment at finishing as runners-up in both European Team Squash Championships‘ finals before a packed crowd at the Val de L’Arc sports centre in Aix-en-Provence, there was joy for Netherlands after winning the women’s crown for the first time – and delight for England who won the men’s title in the premier European Squash Federation event for the 18th successive year.

A surprise loss to third seeds France in the final women’s qualifying round put Netherlands, the second seeds, into an unexpected semi-final against England, the favourites who had beaten them in the previous seven finals.  But an inspired Dutch performance led to England’s first defeat in the 33-year history of the event – and an eighth successive appearance in the climax, against first-time finalists France.

And Dutch stalwart Vanessa Atkinson, the 34-year-old former world number one and world champion who is making her 18th successive appearance in the event since 1993, played a sensational opener – avenging her earlier loss to Camille Serme by beating the young French number one and new world No10 9-11, 11-7, 11-3, 11-5 in 39 minutes.

However, it was Dutch player Orla Noom who prevailed in the decider, beating Maud Duplomb 11-5, 11-8, 11-7 to give Netherlands their historic maiden win in their 32nd appearance in the championships.

“That sort of match, playing for your country, was more nerve-wracking than my World Open final,” admitted Atkinson to www.squashsite.co.uk afterwards.  “The crowd were so noisy, I just had to try to block them out and play my game – but playing in such an atmosphere has to lift you.

“In the end I think it came down to my experience against an up-and-coming player just out of juniors.  She played the same sort of game as the other day, but hitting it low and hard doesn’t work as well on a glass court, and I was finding the corners better than last time.

“She was making errors too, when I was feeling it physically.  She’d give me a couple of points which gave me a lift.” 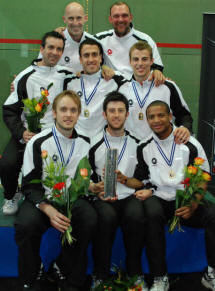 France‘s hopes of fortunes in the men’s final were dashed when top seeds England defeated the second seeds 4/0 in the tenth final clash between the two countries in the past 11 years!  The win gives England the title for the 18th year in row – the run beginning in the same French city in 1993.

In the second match, world No6 Gregory Gaultier – playing in his home town – was unable to dent the determined play of England number one Nick Matthew.  It took 53 minutes, with world number two Matthew prevailing 11-9, 11-9, 11-6 to put the visitors 2/0 ahead.

“I was pleased with that,” said Willstrop after his opening win. “His level seemed to drop after those tough first and third games – I could feel it as soon as we went back on court.  I was pretty consistent throughout. If you beat Thierry in front of a crowd like that you know you’ve played well.”

In the play-offs for third place, former champions England beat Ireland 2/1 in the women’s championship, and Netherlands defeated Wales 3/0 in the men’s event.

There were some outstanding performances in the play-offs for the lower places – none more so than by Italy.  13th seeds in the men’s event, Italy made sure of inclusion in the top eight next year by finishing in fifth place, beating fifth seeds Germany 4/0 in the play-off to record their best result ever.  The Italian women’s team also earned a best-ever sixth place finish after losing 2/1 to Germany in the play-off for fifth place.

After four years out of the top eight in the women’s event, Scotland earned a return to the elite group by beating Spain 2/1 in the play-off for seventh place.

Czech Republic made their debut in the men’s championship in 1994 – and have now established themselves in the top eight for the first time after finishing in eighth place, narrowly losing the play-off for seventh place to Scotland after a countback in games.

Lower in the hierarchy, Slovakia and Ukraine will also leave Aix-en-Provence with their best-ever results:  The teams met in the play-off for 17th place – with Slovakia winning 3/1 to record their best finish in five appearances, with Ukraine’s 18th place their highest finish in their sixth successive appearance.